LONDON, England (CNN) -- Rupert Murdoch's News International, which plans to begin charging for online content, said Thursday it was to close its free London newspaper as part of cost-cutting measures. 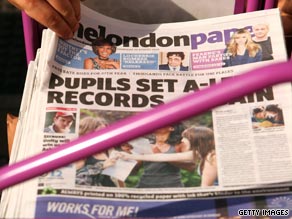 The Londonpaper, one of three free publications circulated in the British capital, is to close.

The Londonpaper, which employs 60 editorial staff, will cease publication within a month, according to a statement.

"The strategy at News International over the past 18 months has been to streamline our operations and focus investment on our core titles," James Murdoch, who heads his father's Europe and Asia operations said.

He added that the performance of the newspaper had "fallen short of expectations," adding: "We have taken a tough decision that reflects our priorities as a business."

The Londonpaper, one of three free titles circulated to the English capital's commuters, recorded a pre-tax loss of £12.9 million ($21.2 million) last year, according to News International.

It was launched in 2006 as a rival to the city's longstanding paid for publication, the Evening Standard -- then owned by Associated Newspapers, who retaliated with their own free sheet, London Lite.

Rupert Murdoch said earlier this year his News Corp. media empire would begin charging for online content on its portfolio of titles including The Wall Street Journal, the London Times and the New York Post.

"We are now in the midst of an epochal debate over the value of content and it is clear to many newspapers that the current model is malfunctioning," he told analysts in May.