PARIS, France (CNN) -- Air France will pay families about €17,500 ($24,500) in initial compensation for each victim of the crash of Flight 447 this month, the company's chief executive says. 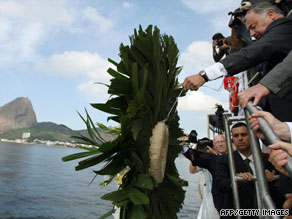 So far, Air France has been in touch with about 1,800 relatives of the people who died when the Airbus A330 crashed into the Atlantic Ocean on June 1, chief executive Paul-Henri Gourgeon told France's RTL radio Friday.

"Of course, this is not always easy, (but) we make up for it," he said. "We have psychologists in each country, in each stop. You know that the passengers were of 32 different nationalities, so all that is of great complexity, but we have the ability to manage this complexity. It's just a question of means and no limits on the means that we put in place."

Gourgeon said it has been difficult tracing the relatives of all 228 victims.

"The modern world is different and we often have only a cell phone, and as you can imagine, this cell phone is unfortunately in the aircraft," he said. "So we probably put more hours to access all the relatives."

The aircraft has not been found, though search teams have found dozens of pieces of debris in the water and think they know the general location of the wreck. The head of the French accident investigation board, Paul-Louis Arslanian, said this week that there is a chance the entire aircraft may never be found.

With no wreckage and few clues about what caused the plane to go down, searchers are focused on finding the plane's data recorders, the so-called black boxes. Data from the recorders may be crucial in pinning down a cause.

Autopsies conducted on some of the 50 bodies found so far show they suffered broken bones, including arms, legs and hips, Brazilian authorities have told French investigators, Arslanian said.

Experts have said such injuries indicate the flight broke apart before hitting the ocean.

Asked about that theory, Gourgeon said he would not go that far.

There has been difficulty in exchanging information between French investigators and Brazilian coroners, but that is being resolved, he said.

Investigators are looking at the possible role of airspeed sensors known as Pitot tubes, among other factors, as a possible cause of the crash.

CNN's Pierre Meilhan in Atlanta, Georgia, contributed to this report.