LONDON, England (CNN) -- Britain's House of Lords voted Wednesday to suspend two of its members over corruption claims -- the first time a lord has been barred from the chamber since 1642, a spokesman for the chamber said. 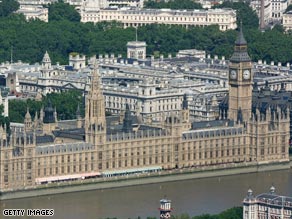 Britain's House of Lords voted to suspend two of its members. It's first time a lord has been barred since 1642.

Lord Taylor of Blackburn and Lord Truscott allegedly agreed to use their influence to get a loophole into a proposed tax law in exchange for cash, but the person offering the bribe turned out to be an undercover reporter.

The Sunday Times newspaper ran the sting operation, in which journalists approached members of the House of Lords, claiming to be acting on behalf of a foreign business looking to open a chain of stores in the United Kingdom.

"Secret recordings showed Lord Truscott, a former energy minister, discussing a fee of up to $113,000 to work 'behind the scenes' on behalf of the lobbyists, while Lord Taylor offered to conduct a campaign to persuade ministers and officials for a one-year retainer of $189,000," the newspaper said. "Neither peer took any money or offered to [introduce] an amendment themselves."

Truscott and Taylor were among four lords investigated by the House of Lords Sub-Committee on Interests.

The ethics panel found last week that Truscott "was advertising his power and willingness to influence parliament in order for substantial financial inducement."

He called the verdict "outrageous and slanderous," according to the official report by the panel, which rejected his appeal against the decision.

Taylor said he knew the journalists were running a sting operation and that he made "increasingly extravagant and outlandish claims in an effort to 'flush out' the truth," according to the official Lords report on the incident.

The ethics committee considered his defense "full of internal contractions" and found him in breach of the Lords Code of Conduct.

Two other lawmakers, Lord Moonie and Lord Snape, were found not to have breached the code.

The suspension of Truscott and Taylor is officially for breaching the Code of Conduct, which states that members are required to "always act on their personal honor."

They will not face criminal charges, London's Metropolitan Police said.

The suspension will last until the next session of parliament begins in November. Only the Queen can permanently strip a lord of his title.

Both Taylor and Truscott are associated with the governing Labor Party. Thomas Taylor joined the House of Lords, the upper house of parliament, in 1978. Peter Truscott got his baronage in 2004.

Their historic suspension comes a day after the speaker of the House of Commons, the lower house of parliament, was forced to resign -- the first such resignation in more than 300 years.

All About House of Lords • United Kingdom