L'AQUILA, Italy (CNN) -- The youngest hadn't lived half a year. The oldest had lived nearly a hundred. 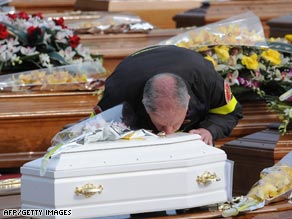 A rescue worker Friday kisses the coffin of a child killed by this week's earthquake in central Italy.

The official government list of victims from this week's earthquake in central Italy reached 287 on Friday, as Italians held a mass state funeral to lay the victims to rest.

They included Antonio Loavan Ghiroceanu, who was born December 11. He would have been 6 months old on Saturday.

The oldest-known victim of the quake was Evandro Testa, 96, who was born in 1913.

More than 200 caskets were lined up at the funeral, draped with flowers. At least one small white coffin belonging to a child sat atop a larger coffin, a baby's pastel outfit hanging off the side.

The funeral was being held outside a hangar in Coppito, a town adjacent to the earthquake's epicenter of L'Aquila.

Officials elected to hold the Mass in the open air to avoid the risk of injury from falling debris. Aftershocks continue to shake the region more than four days after the earthquake, and some were even felt during Friday's funeral.

All of the area's cardinals and bishops, along with 100 priests, attended the special funeral Mass. Italian Prime Minister Silvio Berlusconi was also there, greeting and embracing some of the thousands of mourners before the service.

Cardinal Tarcisio Bertone presided over the Mass as an envoy from Pope Benedict XVI, who plans to visit the region after Easter.

Bertone said the funeral was a "precious moment" to understand the meaning of life and death.

"Everything can stop in a second -- projects, plans -- everything finishes. All that remains is love," he said. Watch more on funeral

Mourners, who were transported to the funeral on buses, dabbed their eyes and noses. Some stared at the ground or held each other. Few appeared focused on anything but remembering the victims.

"I feel rebirth in the heart, because below that rubble there is a will to rebuild, to start again, to plan and to dream," Bertone said, offering a message of hope.

The towns of L'Aquila and the surrounding region, he said, "will come back stronger, will have more courage and give life to these places with that power and strength and dignity of the soul that distinguishes them."

As well as sending Bertone to deliver his message, the pope sent holy oils to L'Aquila and a chalice with which to take Communion.

The 6.3-magnitude quake Monday morning left about 30,000 people without their homes. Almost 20,000 of them are braving chilly nights in tents while about 11,000 others are staying in hotels, said Agostino Miozzo, a spokesman for the Italian Civil Protection Agency. Watch more on the aftermath

Recovering from such losses and rebuilding the city of L'Aquila will take several years, according to Miozzo. The medieval city is about 120 km (75 miles) northeast of Rome.

Aftershocks have heightened anxiety in the area -- including a moderate 5.6 magnitude tremor that struck the area Tuesday.

"The mood is a little bit afraid," said Marco Volponi of the Civil Protection agency. He was working in a tent camp, housing people whose homes were inhabitable.

In the nearby village of Onna, 40 people -- more than one out of every eight residents in the town of 300 -- were killed in the earthquake. On some streets, every single home was destroyed.

Anna Rita Difilice lost her son, Fabio, 20, to the quake -- the deadliest to strike Italy in decades and the first major quake in the country in seven years.

She said she doesn't know what comes next for her. Her village has become populated with tents, fold-up beds and feeding stations handing out food, water and other supplies for survivors.

But she said she knew one thing: she's not going anywhere.