(CNN) -- International media reaction to the G-20 summit in London ranged from wary to upbeat Friday, as the world digested details of the $1 trillion plan to tackle the economic crisis. 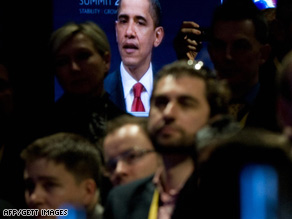 The Guardian newspaper acknowledged the accomplishments of the summit, but said more work needs to be done to fix the world economy. It dismissed British Prime Minister Gordon Brown's claim that the summit marked "the day the world came together."

"Yes, there were some good lines on greater international oversight of financiers and extending the regulatory net to cover hedge funds," it said. "But amid a financial crisis that has shown up the utter inadequacy of the regulatory system and aroused the sort of anger displayed in this week's protests, there was plenty of room to go further."

Meanwhile, The Times said the summit ended up as "a triumph," despite the stories about rows, inflated expectations and threatened boycotts that had dominated the lead-up to the meeting.

Le Monde said President Barack Obama was responsible for forging a compromise between France and China over the issue of tax havens.

It said Obama had seized his opportunity to remind the world that America was now listening following George W. Bush's departure from office.

The newspaper said Obama had shown the U.S. had humility and would listen to different points of view.

La Figaro said the competing countries had all gained something that they wanted from the summit and Gordon Brown had played an important role in bringing the different sides together.

Chinese President Hu Jintao and U.S. President Barack Obama's meeting on the sidelines of the G-20 summit "redefined bilateral ties, expanded the scope of future cooperation, and brought both their nations' ties to a new jumping off point," Xinhua cited analysts as saying. The meeting has been dubbed "G-2" because of the emergence of China as a major player at the G-20.

The summit was "fruitful" for both nations, which agreed on a two-track "strategic" and "economic" dialogue. Such would involve U.S. Secretary of State Hillary Clinton and Chinese State Councilor Dai Bingguo on political, security and global issues; and U.S. Secretary of the Treasury Timothy Geithner and Chinese Vice Premier Wang Qishan on finance and the economy.

Xinhua did not refer to the idea floated by China's central bank chief, Zhou Xiaochuan, of replacing the U.S. dollar with an alternative for the world's reserve currency.

The Asahi Shimbun said the G-20 summit offered a key opportunity to enhance the International Monetary Fund and to unite against the economic crisis: "The leaders must not forget that the spread of protectionism during the Great Depression paved the way to World War II."

"Japan's full-fledged economic recovery also depends on the outcome of this crucial conference," the editorial concluded.

Japan's heavily dependent export economy has plunged, and the paper noted the nation's support for the U.S. idea of additional fiscal spending to boost national economies.

Korea Times cautioned on the eve of the summit against a "'say-hello' session," with "just an agreement of general principles with a few unbinding actions.

In an opinion piece, the English-language daily said that President Lee Myung-bak risked the loss of South Korea's place as a "middle power" in both the industrial and developing blocs. The paper urged him to "more actively call for the removal of inequality between developed and developing countries."

"To enhance its voice and role on the international stage, it should first focus on representing the interests of the weak and the poor rather than pretending to be a global leader. The world's 13th-largest economy is more fit as a mediator than as an initiator."

According to Matthew Franklin of The Australian: "The Prime Minister [Kevin Rudd] was clearly across the issues and achieved his aim of being seen as an activist leader of a middle power nation with the ambition to punch above its diplomatic weight."

The Australian noted the jump of the Australian dollar to a three-month high during the G-20 summit, saying Rudd should be satisfied with "the success of Australian's long-term campaign on IMF reform and support for China."

Franklin also described Obama's debut on the world stage as "stunning," saying, "The president seemed calm and assured in his public comments ... He will leave with his standing enhanced."

By contrast, the Indian media were highly critical of Prime Minister Manmohan Singh's performance at the G-20 summit, saying the country of 1.1 billion people and with an average 9 percent GDP growth was less than assertive.

"While global leaders, be it France's Nicolas Sarkozy, China's Hu Jintao or even Germany's Angela Merkel have strong views on the two most critical issues -- fiscal stimulus and financial markets' regulation -- India's position so far suggests that it will be happy with just about a nicely worded G-20 communiqué tomorrow," P. Vaidyanathan Iyer of Indian Express wrote.