ST. POELTEN, Austria (CNN) -- A jury in Austria has found Josef Fritzl guilty of raping and imprisoning his daughter for more than two decades and sentenced him to life in prison. 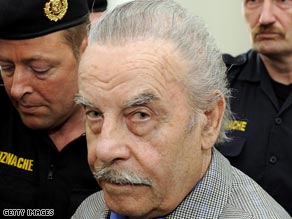 Josef Fritzl arrives for sentencing at the courthouse in St. Poelten on Thursday.

It was the maximum sentence for the most serious charge Fritzl faced: one count of murder, for allowing one of the babies he fathered with his daughter to die shortly after birth.

The eight-member jury returned a unanimous verdict on all counts. Fritzl, dressed in a gray suit, blue shirt and dark tie, stared blankly ahead and showed no emotion as the jury delivered its verdict.

The 73-year-old had pleaded guilty to all charges on Wednesday, but Austrian law requires a jury to return a verdict as well.

Fritzl will soon be moved to a detention facility for mentally abnormal offenders, where psychiatrists will evaluate him and decide on therapy. Until then, he will remain in a two-person cell in St. Poelten.

The man who kept his crimes a secret for 24 years until he was exposed last year made a final, emotional apology to the court Thursday morning. Read blog on how Austria was reacting before sentencing

"I am deeply sorry with all my heart for what I have done, but I cannot go back and change it," Fritzl told the court at St. Poelten, about 70 kilometers (45 miles) east of Amstetten, where he and his family lived.

The jury found Fritzl guilty of incest, rape, enslavement and false imprisonment of his daughter Elisabeth. It also found him guilty of two assault charges and murder in the death of the baby, one of twins, which died 66 hours after birth.

Fritzl initially pleaded not guilty to murder, enslavement, and one of the assault charges, and partly guilty to rape. He surprised his own lawyer by changing his plea Wednesday.

Prosecutor Christiane Burkheiser urged the jury Thursday to return a murder conviction. She called Fritzl's admission of guilt a ploy.

"This was not a confession by the accused. It was a change in strategy," she told the court.

Both sides accepted Thursday's verdict and Josef Fritzl refused the option to appeal, court officials said. He could be considered for parole in 15 years, when he would be 88, said court spokesman Franz Cutka, but the Ministry of Justice will decide whether to allow it.

Fritzl's lawyer revealed Thursday that Elisabeth had been in court Tuesday, the second day of the trial. Defense attorney Rudolf Mayer said the elder Fritzl noticed his daughter's presence in the final hour of viewing Elisabeth's videotaped testimony.

Mayer said he was not disappointed with the verdict because it was a "logical consequence" of his client's admission of guilt. He said life in prison is a "very just sentence."

A technical expert testified at the trial that the underground chamber in which Fritzl kept his daughter and their offspring had low ceilings -- about 1.7 meters (5.5 feet) high -- and, for the first couple of years, only minimal sanitation. The cellar had no daylight or fresh air.

Prosecutors said Fritzl closeted Elisabeth in the specially designed cellar in 1984, when she was 18, telling other family members that she had run away to join a cult. He kept her there for 24 years, authorities believe, repeatedly sexually assaulting her and fathering her seven children.

Fritzl took three of the children upstairs to live with him and his wife, telling the family that the missing Elisabeth had dropped them off.

Elisabeth and the remaining children never saw daylight, prosecutors said, and Fritzl went away for long periods, leaving them without food. To punish them, prosecutors said, Fritzl sometimes turned off the power in the cellar for up to 10 days.

In addition, they alleged, Elisabeth was often sexually assaulted in front of the children.

One of the babies -- a boy named Michael -- died shortly after birth. Prosecutors charged Fritzl with murder in his death because he did not receive medical care.

Fritzl admitted Wednesday that he was in the cellar when the baby was born. He noticed the child was breathing heavily, he said, but he did not think the baby would die and decided not to seek help.

Fritzl told the court he was probably responsible for the child's death and pleaded guilty to his murder. He had earlier pleaded not guilty to the charge but said he changed his mind after hearing Elisabeth's videotaped testimony.

The prosecution said Thursday that Michael struggled for 66 hours before dying of respiratory problems. They said Fritzl knew what was happening but was indifferent.

Authorities have said that Elisabeth and her children now have new identities and are in a secret location. Asked at a news conference why other family members have not testified, officials said they did not wish to.

The case came to light in April 2008, when Elisabeth's then-19-year-old daughter, Kerstin, became seriously ill and ended up in the hospital. Hospital staff became suspicious and alerted police, who then discovered the family's plight in the cellar.

CNN's Diana Magnay and Frederik Pleitgen contributed to this report.