LONDON, England (CNN) -- Protesters draped themselves in the colorful flag of Tibet and shouted slogans at the Chinese embassy in London on Saturday at the start of a demonstration to mark the 50th anniversary since the Tibetan uprising against China. 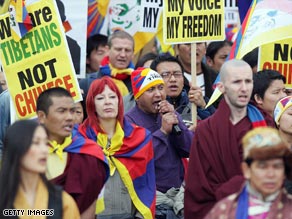 Protesters have gathered in London to mark the 50th anniversary of the Tibet uprising.

The small but fervent group marched from the embassy through west London to Trafalgar Square, where they were due to hear a speech by Thomas Shao Jiang, a Chinese dissident who was one of the student organizers of the Tiananmen Square protest in Beijing in 1989.

"I think it's important that Tibet is kept in the world's eye," protester Chris Last told CNN amid placards declaring "50 years too long" and "We are Tibetans, not Chinese."

While Tibet is technically autonomous from the central Chinese government, its current government is directed from Beijing. The Dalai Lama, traditionally the spiritual and political leader of the Tibetan Buddhists, lives in exile in India.

Tuesday marks the 50th anniversary of a failed 1959 uprising against Beijing's rule that sent the Dalai Lama into exile.

Protest organizers said the march was meant to draw public attention to what they say is a deepening crisis a year after China cracked down on protests across Tibet.

"(British Prime Minister) Gordon Brown and other world leaders must respond urgently and publicly to the Tibet crisis by taking immediate action," said Stephanie Brigden, director of Free Tibet. "They should demand that China calls off its security stranglehold in Tibet as an essential first step towards backing the Dalai Lama's initiative in finding a long-term and negotiated settlement to China's occupation."

Tibetan Buddhists say they resent the slow erosion of their culture amid an influx of Han Chinese, the largest ethnic group in China. That resentment spilled over last March, when Buddhist monks initiated peaceful anti-Chinese protests in the regional capital, Lhasa, on the 49th anniversary of the uprising.

The protests soon turned violent, with demonstrators burning vehicles and shops. Some protesters advocated independence from China, while others demonstrated against the growing influence of the Han Chinese in the area and other regions of China with ethnic Tibetan populations.

China accuses the Dalai Lama of fomenting the discord in his homeland -- a charge he denies.

"The Dalai Lama demanded the establishment of the so-called 'Greater Tibetan area' on a quarter of the Chinese territory, to drive away Chinese army stationed there guarding the Chinese territory, and to drive away Chinese people of other ethnic groups who lived there for generations. Is such a person a religious figure?" Chinese Foreign Minister Yang Jiechi said Saturday.

The Dalai Lama has said he does not advocate violence or a separate and independent Tibet. He has said he wants a genuine autonomy that preserves the cultural heritage of the region.

"I'm just disgusted with the way the Chinese behave towards the Tibetans. Even if you accept that Tibet has been swallowed up by China, why can't they give to them autonomy, respect their religion, their culture?" protester Bob Hunt said Saturday. "These are peaceable people, one of the most peaceable people in the world."

Protester Shobha Trivedi said she hoped the protest march would make people more aware of the situation inside Tibet.

"I feel as a human being, what (the) Chinese are doing for 50 years, nobody's bothering with it," she said. "And it's a real shame on everyone."