LONDON, England (CNN) -- Michael Bookatz, 32, was walking home one night in January when he noticed a man walking toward him. 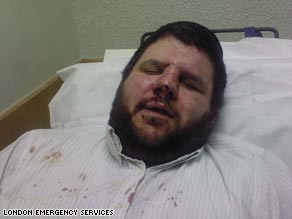 Michael Bookatz as he looked when first responders arrived after he was attacked.

"Then he just suddenly ran up to me and punched me in the face," he said. "He started stamping on me, kicking me. A friend of his came from the other side of the road and started stamping and kicking on me. And they said: 'This is because of what happened to the Palestinians in Gaza.'"

The attack on Bookatz -- a Jew who wears a skullcap and lives in a particularly Jewish neighborhood of London -- is one of more than 250 assaults on Jewish targets in the United Kingdom since the beginning of the year, according to the Community Security Trust, a non-governmental organization which monitors anti-Semitism in Britain.

The group recorded more than 200 incidents in the month of January alone, the highest monthly total it has seen since it began keeping records in 1984.

London's Metropolitan Police "report that since December, there have been four times as many anti-Semitic attacks as attacks on Muslims, even though there are seven or eight times the number of British Muslims as there are Jews," said British lawmaker Denis MacShane, who chaired the country's first parliamentary inquiry into anti-Semitism.

Against this backdrop, London hosted a two-day international conference on combating anti-Semitism Monday and Tuesday.

Watch what Bookatz says of the attack on him »

MacShane called it the "first conference of its type," bringing together lawmakers from at least 35 different countries.

"Parliaments now have to acknowledge that anti-Semitism is back. It's a potent ideological force, causing fears to Jews in many different countries, and it has to be combated by all people that care about democracy," MacShane said.

It is not only a problem for Jews to tackle, the lawmaker said. "I'm not Jewish. Most people at the conference are not Jewish," he said.

The rise in attacks on Jewish targets comes amid heightened tension in the Middle East, the Community Security Trust noted.

The incidents include arson and graffiti attacks on synagogues, verbal and physical abuse of Jews, and hate mail. Similar events were reported across Europe during Israel's three-week military assault on Hamas in Gaza in December and January, the CST said in a statement.

But Bookatz is not convinced Gaza is the real reason for the assaults on Jews.

"Anti-Semitism is around," he said. "It has always been around. Throughout my life, I have experienced anti-Semitic attacks.

"Gaza was probably a focal point, something that triggered it: 'OK, now that Gaza is happening, we can use it as an excuse to attack people,'" Bookatz said.

MacShane said lawmakers around the world needed to take a stand against anti-Semitism.

He warned anti-Semitism was an indicator of other problems.

"Whenever anti-Semitism sinks roots, the world is heading in a disastrously wrong direction," he said. "That is a lesson from history. If we don't tackle anti-Semitism in the early stage, then it devours democracy."

CNN's Atika Shubert and Eileen Hsieh contributed to this report

All About Religion • Hate Crimes