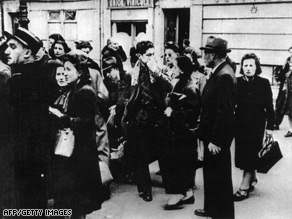 Jews and foreigners are rounded up in Paris in May 1941.

But, the Council of State said, "measures taken since the end of the Second World War have compensated for the damage."

Northern France was directly occupied by Nazi Germany during World War II while the south of the country was ruled by the Vichy government that collaborated with Adolf Hitler.

France's role in the deportation of its Jews was a taboo subject for decades after the war.

The trial of Maurice Papon, a civil servant in the collaborationist Vichy government, for deporting Jews, forced the country to confront its role in the Holocaust.

Papon was convicted in 1998 by a French court for complicity in crimes against humanity for his role in the deportation of 1,590 Jews from the city of Bordeaux.

Most of the deportees later perished at the concentration camp at Auschwitz in modern day Poland. Papon died in February 2007, aged 96, after serving part of his term and then being freed on health grounds.

There were approximately 350,000 Jews in France at the time of the country's defeat by Germany in 1940. At least half of those were refugees who had already fled Germany or countries already under Nazi occupation, according to the Web site of the United States Holocaust Memorial Museum.

At least 77,000 Jews were deported to their deaths from French transit camps between 1942 and the end of German occupation in December 1944. Of these, around a third were French citizens and more than 8,000 were children under 13.