LONDON, England (CNN) -- A British multiple sclerosis sufferer is attempting to clarify the law on assisted suicide, an option she has said she wants if her pain becomes unbearable. 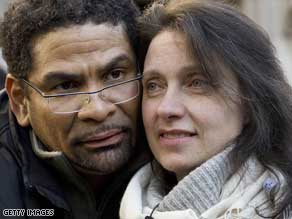 Debbie Purdy, 45, was at the Court of Appeal in London Tuesday to challenge an October judgment from the High Court, which refused to clarify the law.

Purdy suffers from primary progressive multiple sclerosis, in which symptoms become progressively worse over time. She has said she wants the option to travel abroad to have an assisted death should her suffering become unbearable.

Under Britain's current law, Purdy's husband, Omar Puente, could face 14 years in prison if he accompanies her to a country, such as Switzerland, where assisted suicide is legal.

Purdy's case had asked the High Court judges to tell her at what point her husband would be breaking the law if she committed suicide with his help.

"If Omar sits with me on the plane to Switzerland he is breaking the law, even if I make the arrangements myself," Purdy said ahead of Tuesday's appeal. "What I, and everybody else, don't know is the criteria on which the authorities judge whether it is in the public interest to prosecute Omar. I think we are entitled to know this information."

Her appeal will be heard at the court in London on Tuesday and Wednesday.

Purdy says that if her case is not resolved, she may decide to go alone to a clinic while she is still able to on her own. She says she would prefer making that journey much later, only once her condition deteriorates, so she can die with her husband by her side.

"It has become apparent through the support I have received during my case that this is no longer just about myself and Omar, but it's about clarification of the law for all UK citizens who may be facing these decisions now, or want reassurance for the future," Purdy said.

Dignity in Dying, a British charity that has worked on Purdy's case, says it is important for the British government to distinguish between people who maliciously encourage suicide and those who accompany a loved one abroad to die.

"Ultimately we would like to see the law in the UK changed to allow terminally ill, suffering, mentally competent adults the safeguarded choice of an assisted death, so that people like Debbie don't have to travel abroad for this compassionate assistance," said Sarah Wootton, executive director of Dignity in Dying.

"While any change in the law is a matter for Parliament, we hope that the courts will at least clarify our existing law."

Dignity in Dying campaigns to give terminally ill patients the option of an assisted death so they "would not be forced to contemplate dying before they are ready," according to the group's Web site.

Under current law, the 1961 Suicide Act, assisting a suicide is a crime punishable by up to 14 years imprisonment. Anyone who aids, abets, counsels or procures the suicide of another, or an attempt by another to commit suicide, is liable.

A Ministry of Justice spokesman refused to comment specifically on Purdy's case.

"The government believes that any change to the law in this area is an issue of individual conscience and a matter for Parliament to decide, rather than government policy," said the spokesman, who asked not to be named in line with policy.

To date, no one who has accompanied a loved one to the Swiss clinic Dignitas has been prosecuted, but they have been questioned by police and threatened with prosecution, according to Dignity in Dying.