BERLIN, Germany (CNN) -- German Chancellor Angela Merkel demanded Tuesday that Pope Benedict XVI firmly reject denial of the Holocaust, a week and a half after the Vatican rehabilitated a bishop who denied the Nazis had intentionally murdered 6 million Jews. 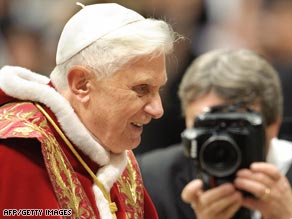 The pope in January lifted the excommunication of Bishop Richard Williamson and several other clergy members who had been expelled from the Catholic Church in 1988.

The pope's move came days after the broadcast of an interview in which Williamson -- a member of the Society of Saint Pius X -- denied the Nazis had used gas chambers.

"I believe that the historical evidence is strongly against -- is hugely against -- 6 million Jews having been deliberately gassed in gas chambers as a deliberate policy of Adolf Hitler," Williamson said in the interview with a Swedish television station, which also appeared on various Web sites after its broadcast. "I believe there were no gas chambers," he added.

Merkel, speaking during a press conference in Berlin on Tuesday, said the Vatican needed to make clear "that there must be positive relations with the Jewish community. I do not think that this has been made adequately clear yet."

Holocaust denial is a crime in Germany.

The Vatican responded by listing four occasions when the pope had spoken about the Holocaust, starting with his historic visit to a Jewish synagogue in Cologne, Germany, in 2005.

On Monday, a top Vatican official said the Williamson issue was closed.

"The Society of Saint Pius X has distanced itself from its bishop and apologized to the pope for this embarrassing incident. The pope spoke clearly on (last) Wednesday. I think the question can be considered closed," Vatican secretary of state Cardinal Tarcisio Bertone said, according the Catholic daily Avvenire Tuesday.

American Jewish leaders were outraged by the rehabilitation of Williamson. "The decree sends a terrible message to Catholics around the world that there is room in the church for those who would undermine the church's teaching and would foster disdain and contempt for other religions, particularly Judaism," said Abraham Foxman, director of the Anti-Defamation League.

The pope -- who was born in Germany and was a child during the Nazi period -- rejected Holocaust denial in public statements on January 28.

He said he hoped the memory of the Holocaust "induces humanity to reflect on the unpredictability of evil when it conquers the heart of man. The Shoah (Holocaust) must be for all a warning against oblivion, against denial or reductionism, because the violence done against one human being is violence done against all."

Williamson apologized last week for the "distress" which his remarks caused the pope, but did not retract them.

Williamson and three other bishops who belong to the ultra-conservative Society of Saint Pius X were excommunicated by Pope John Paul II in 1988. The society was founded by Archbishop Marcel Lefebrve, who rebelled against the Vatican's modernizing reforms in the 1960s, and who consecrated the men in unsanctioned ceremonies.

Lombardi, the papal spokesman, said the Vatican's decision to accept Williamson was part of its desire to normalize relations with the ultra-conservative group, and had nothing to do with the bishop's personal views.