MOSCOW, Russia (CNN) -- Russian Orthodox Church leaders Tuesday selected Metropolitan Kirill, a 62-year-old modernizer, to be the next head of the church. 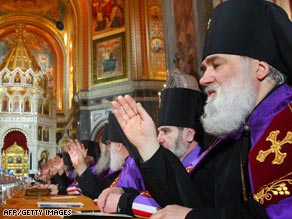 Kirill becomes the first Russian Orthodox patriarch chosen since the fall of communism in 1991, and the 16th since the position was created in 1589. He replaces Patriarch Alexy II, who died in December.

Kirill, who has been acting head of the church since Alexy died, is widely seen as a modernizer. He has chaired the church's department for external relations since 1989.

He met Pope Benedict XVI recently, one of the highest-level meetings between Roman Catholic and Orthodox leaders since the two churches split more than 1,000 years ago.

Kirill said before he was elected Tuesday that the Russian Orthodox Church should work with other Christian faiths to support "those partners who are ready to oppose, together with us, the marginalization of religion, to speak out for believers' rights and to build one's life according to one's own principles, to defend the underlying meaning of morality in the life of an individual and society."

He got 508 votes in the conclave of about 700 priests, monks and lay leaders from 64 countries who gathered to chose the new patriarch.

Metropolitan Kliment, the only other official candidate after another contender dropped out and endorsed Kirill, got 169 votes. Kliment and Kirill both had the title Metropolitan -- the second most senior title in the Russian Orthodox Church hierarchy.

Kirill will be enthroned on Sunday. The position is for life.

Alexy, 79, died December 5 after 18 years at the head of the church. He is credited with reviving the denomination after decades of communist rule.

Russian President Dmitry Medvedev and Prime Minister Vladimir Putin both attended his funeral, along with thousands of others who packed the church.

His bier was draped in a green banner inside Moscow's Christ the Savior Cathedral, flanked by dozens of bishops as the ceremony moved ahead.

A native of Estonia, Alexy became the head of the Russian Orthodox church in 1990.

After the collapse of the Soviet Union in 1991, he was dogged by allegations that he collaborated with Soviet authorities in persecution of Christians in the officially atheist state.

All About Russian Orthodox Church • Culture and Lifestyle • Religion