HANOVER, Germany (CNN) -- Archaeologists have found more than 600 relics from a huge battle between a Roman army and Barbarians in the third century, long after historians believed Rome had given up control of northern Germany. 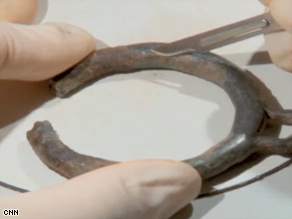 Some of the artifacts are so well preserved that the scientists can already retrace some of the battle lines.

"We have to write our history books new, because what we thought was that the activities of the Romans ended at nine or 10 (years) after Christ," said Lutz Stratmann, science minister for the German state of Lower Saxony. "Now we know that it must be 200 or 250 after that."

For weeks, archeologist Petra Loenne and her team have been searching this area with metal detectors, pulling hundreds of ancient Roman weapons out of the ground. They paint a picture of a highly organized, technologically superior Roman army beset by Germanic tribes in a forest about 80 km (50 miles) south of the modern city of Hanover.

The hillside battlefield was discovered by relic-hunters illegally searching for souvenirs of more recent wars near the town of Kalefeld-Oldenrode. One of them brought some of the items he found to Loenne, who works for the local government.

The artifacts are so well preserved that the scientists can already retrace some of the battle lines.

Watch how the battlefield discovery could re-write history »

"We believe the Germans ambushed the Romans here, but the legions quickly fired back with catapults and archers -- and then it came to a massive man-on-man onslaught," Loenne said.

The items unearthed so far include an axe, still sharp after nearly 1,800 years; horseshoes; shovels; spearheads; and dozens of arrowheads for a Scorpio, a cross between a catapult and a crossbow -- the ancient equivalent of artillery.

"With a very high speed, on a very long distance -- about 300 meters -- you can hit targets precisely," said Henning Hassman, of Hanover's archeological institute.

Researchers say the evidence suggests the tribesmen lured the Romans into the forest to keep them from making full use of those long-range weapons and draw them into hand-to-hand combat, outside of the formations the imperial troops had mastered. However, they believe the Romans ultimately prevailed.

Other relics include coins depicting the late second-century Roman emperor Commodus, depicted in the Oscar-winning Hollywood epic "Gladiator" -- a film that opens with a scene of battle against a barbarian horde that scientists say appears to be largely accurate. And Loenne said her team may have only begun to scratch the surface of the forest.

"We hope we might find fortifications and if we are lucky, maybe even battlefield graveyards," she said.