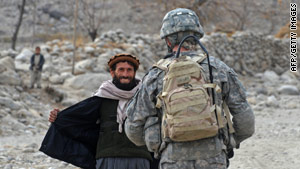 "The operation was against a network of folks, who had been tracked for a while, involved in producing IEDs as well as some criminal activity," said the official, who asked not to be named.

"As a result of the action, the best info that we have is that nine of those militants in that network were killed. That's based on weapons and IED components at the scene," and it appears the nine were males, the official said.

IED is the acronym for improvised explosive device, which is a roadside bomb.

U.S.-led forces in Afghanistan said Monday they were investigating reports that 10 Afghan civilians, including eight students, were killed Saturday in a coalition operation in the Narang district of Kunar province.

Said Fazelayallah, governor of Kunar province, told CNN Monday that 10 civilians, in fact, were killed. Coalition forces said they killed their targets, he said, but a delegation sent by the governor to investigate reported the civilian casualties.

Civilian casualties in the Afghan war have stoked outrage among the citizenry and Afghan authorities. U.S. and other international forces have been working to stop such fatalities, and they have accused Taliban militants of putting civilians in harm's way.

The United Nations in Afghanistan said on Tuesday that from January to October of this year, 1,404 deaths have been caused by insurgents; 465 have been caused by pro-government forces, such as NATO's International Security Assistance Force; and other causes have led to 165 civilian deaths.

In this Kunar province incident, Fazelayallah said the operation was launched without the knowledge of government officials in the province.

The U.S. military source said it was "a joint operation with Afghan and U.S. forces."

The numbers of civilian casualties have fallen off in recent months, since Lt. Gen. Stanley McChrystal took over as U.S. commander in Afghanistan.

The military's goal is to protect population centers to enable the government to improve security and governance, McChrystal told CNN's Christiane Amanpour earlier this month. Civilian casualties, he said, make it less likely that the Afghans will support the coalition.

"It is better to miss a target than to cause civilian casualties," he said. "We can always target enemy leaders later. We can't make up for the fact that we killed civilians."