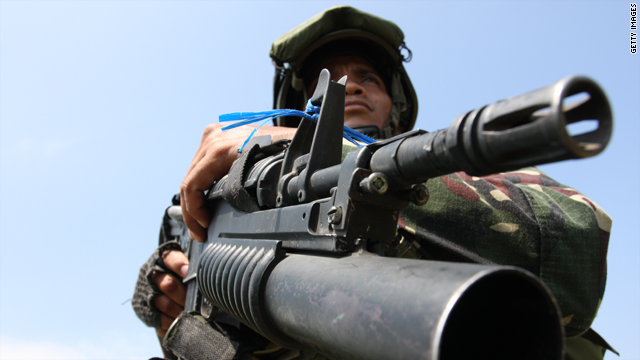 A Filipino soldier secures the site where weapons and ammunition were dug up on December 6 in Maguindanao.
STORY HIGHLIGHTS
RELATED TOPICS

(CNN) -- The Philippine House of Representatives and Senate were meeting Monday to debate the imposition of martial law in the country's south by President Gloria Macapagal-Arroyo in the aftermath of last month's massacre of 57 civilians.

As required by law, the president issued a report Sunday explaining her reasons for making the proclamation for the province of Maguindanao.

"Lawless elements have taken up arms and committed public uprising against the duly constituted government and against the people of Maguindanao," Arroyo said in a 20-page letter to the leaders of the House and Senate.

Martial law went into effect Friday night, allowing arrests without a warrant. Army spokesman Lt. Col. Romeo Brawner Jr. said it was necessary to impose peace following what has been called a politically motivated massacre. He added that Congress would have to approve any extension beyond 60 days.

The House and Senate might jointly convene on Tuesday to discuss the president's report, House Speaker Prospero Nograles said Sunday, according to the Philippine News Agency.

The debate began as elite forces of the Philippine National Police clashed in the town of Datu Unsay with suspected followers of the politically powerful Ampatuan family, which has been implicated in the massacre, the Philippine News Agency reported Monday.

Reports said the armed men offered stiff resistance on Sunday against government security forces in a 10-minute firefight, withdrawing after government reinforcements arrived. No casualties were reported on either side.

Charges of rebellion will be leveled against many of those arrested since martial law was implemented, Philippine Justice Secretary Agnes Devanadera said Saturday, CNN affiliate ABS-CBN reported.

At least six members of the Ampatuan family have been arrested, including Datu Unsay Mayor Andal Ampatuan Jr., according to ABS-CBN. Ampatuan, whose father is governor of Maguindanao, has been accused of directing the killings and has been charged with 25 counts of murder.

One of the massacre victims implicated members of the Ampatuan family before she died, the affiliate reported.

Over the weekend, authorities raided at least one warehouse and ranch belonging to the family. They confiscated firearms, ammunition and vehicles, Maj. Randolph Cabangbang, deputy of operations for the eastern Mindinao command, told CNN.

The military was looking at arresting at least 100 people tied to the massacre, ABS-CBN reported. The Philippine military is investigating its own forces in connection with the case as well, Brawner said.

Asked why martial law was imposed 12 days after the killings, Cabangbang said authorities "were trying to build a case, a tight case" against suspects.

"But it is taking long to build a case, so I think the government gave us a free hand in arresting those who are suspects, and allowed us to search, even without warrant. So we really need this declaration of state of martial law."

Violence in the run-up to elections is not uncommon in the country. The Maguindanao massacre, however, is the worst politically motivated violence in recent Philippine history, according to state media.

The victims included the wife and sister of political candidate Ismael "Toto" Mangudadatu, who had sent the women to file paperwork allowing him to run for governor of Maguindanao. He said he had received threats from allies of Gov. Andal Ampatuan Sr., the father of the accused mayor, saying he would be kidnapped if he filed the papers himself.