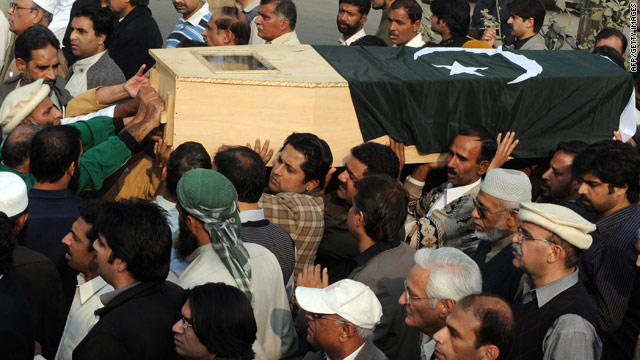 Pakistani men carry a coffin during a funeral ceremony in Lahore for a victim of the Rawalpindi Mosque attack.
STORY HIGHLIGHTS
RELATED TOPICS

Islamabad, Pakistan (CNN) -- The Pakistani Taliban claimed responsibility for Friday's bombing of a mosque in Rawalpindi and vowed to carry out more attacks, according to an e-mail message from the group.

The assault targeted a mosque frequented by Pakistani military personnel, and killed 36 and wounded 75, the military said.

The Tehrik-i-Taliban Pakistan took responsibility for the action on Friday but reiterated its claim in an e-mail to CNN on Saturday because media outlets quoted analysts and some officials who doubted the group's participation.

Watch a report about the attack

"We reconfirmed it, that the TTP has done it, and will do more which are already planned," the group said.

"We once again mention that we are not against the innocent people and the state of Pakistan but against those officers and ministers who are American by hearts and minds and Pakistani just by faces," the e-mail message said.

Four militants armed with guns and grenades stormed the mosque in Rawalpindi, and most of the victims were children. The attack was the latest to shake the garrison city since this year's launch of strong military offensives against Taliban insurgents in the Swat Valley and South Waziristan. Rawalpindi is the headquarters of the Pakistani army.