Management blamed in China mine blast that kills 104 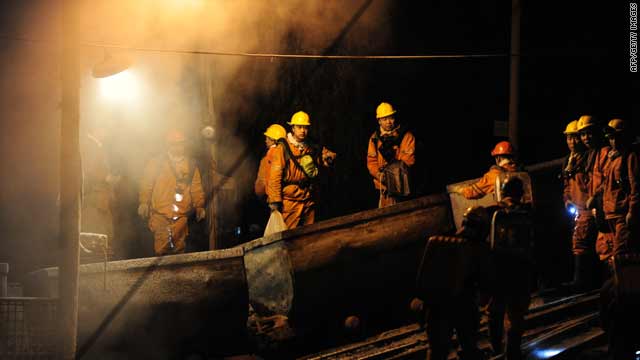 In addition to those killed, 60 miners remained hospitalized from Saturday's morning blast at the Xinxing coal mine in northeastern Heilongjiang province.

Most were being treated for injuries such as carbon monoxide poisoning and burns, CCTV reported. Six were in critical condition with severe burns.

Four other workers were still trapped underground in the mine shaft, the Xinhua news agency said.

The accident started with a gas leak in one of the shafts, officials said. But because of poor ventilation, gas poured into the main tunnel and triggered an explosion that shook 28 of the 30 mining platforms in operation.

About 530 miners were working in the mine at the time.

Luo Lin, head of the State Administration of Work Safety, told Xinhua that the mine's management was to blame for not evacuating workers when they detected a high gas density in the pit.

State regulations stipulate that miners have to evacuate if gas density exceeds 2 percent. The density in the pit was more than 10 percent, authorities said.

"The mine has too many mining platforms in operation and has sent to many workers down the pit to increase output," said Zhao Tiechui, deputy head of the work safety agency.

The mine is owned and operated by the Heilongjiang Longmei Mining Holding Group. Unlike most small- and mid-size collieries, Xinxing produces 12 million tons of coal a year.

Immediately after the blast, the mine's director, deputy director and chief engineer were fired.

Mine accidents are common in China. Last year, 3,200 people were killed in such accidents, state media said.

The latest blast is the deadliest since December 2007, when 105 miners were killed in Shanxi province.