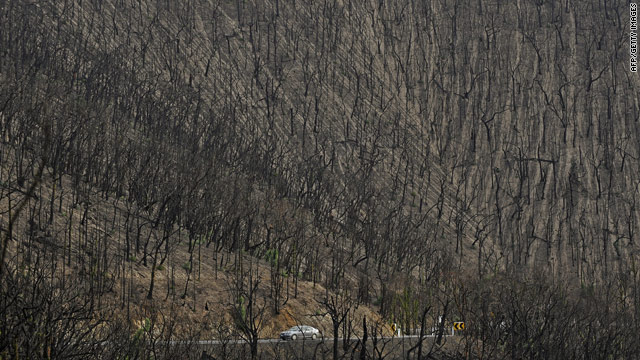 A car drives through a landscape devastated by bushfires in February near Kinglake, 60 kilometers north of Melbourne.
STORY HIGHLIGHTS
RELATED TOPICS

(CNN) -- Authorities are asking residents in some some parts of south Australia to evacuate their homes as an impending heat wave prompted the nation to issue its first "catastrophic" brush fire warning.

The warning system was put in place to better alert residents after a devastating brush fire ravaged the southeastern state of Victoria in February, killing more than 170 people and destroying 2,000 homes.

During that fire, many residents stayed to defend their property.

The Code Red "Catastrophic" warning was issued for the Eastern Eyre Peninsula and West Coast districts in the state of South Australia. Are you there? Send your pictures, video

Such a rating means that even well-constructed and defended homes might not be safe from the blaze, the South Australian Fire Service said.

In addition, three other districts -- Flinders, North West Pastoral and Lower Eyre Peninsula -- were placed under an "Extreme" watch. Such a rating means that only well-constructed homes can withstand the flames.

An intense heat wave -- with temperatures climbing to 104 F (40 C) -- is expected to hit the areas until the weekend. The region is already in the midst of a severe drought. Coupled with low humidity and strong winds, the soaring temperatures will make it ripe for fires to ignite.

Any fire that breaks out will be uncontrollable, the fire service said. People in their path will likely die, it added.