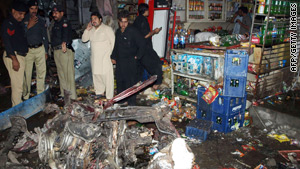 The blast happened in Charsadda, which is located about 18 miles (29 kilometers) north of Peshawar.

The attack happened just as Charsadda District Police Chief Mohammed Riaz Khan was leaving the area, and Khan told CNN he believes his two-car convoy was the target of the attack.

As he left his office and headed home, Khan said a red car approached the convoy but it was blocked by a passing donkey trolley.

Moments later, the car blew up and Khan says he believes that the suicide bomber intended to ram his convoy. Khan also noted that he has recently received threats from militants.

The bomber used 50 kilograms (110 pounds) of explosives in the attack, Peshawar police chief Liaqat Ali said. The impact of the blast destroyed several nearby buildings and vehicles, Khan said.

The dead include six children and three women, Ali said.

In recent days, Peshawar -- the capital of Pakistan's North West Frontier province -- has come under increasingly frequent attacks. A suicide bombing at a police checkpoint on Peshawar's Ring Road killed at least three people Monday. A suicide car bombing Sunday killed 17 people in the city, including an area mayor.

On October 28, a massive car bomb tore through the heart of a bustling marketplace in Peshawar, killing at least 100 people and wounding at least 200 others. It was the country's deadliest attack in two years.

Pakistan has blamed the violence on Islamic militants who have vowed to avenge an intense military offensive to rout them from their haven along the country's border with Afghanistan.