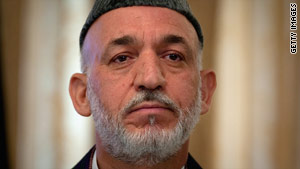 According to the source, Abdullah will likely announce this weekend that he will boycott the runoff presidential election slated for November 7, a runoff that had been scheduled after intense diplomatic arm twisting by the United States.

In a Thursday interview with Amanpour, former U.S. Ambassador to Afghanistan Zalmay Khalilzad had predicted that the country would soon be governed under a power-sharing deal.

"I think there will be power-sharing," Khalilzad said. "Both want power-sharing. The difference is that Karzai wanted to be first declared the winner or win the election and then offer something from a position of strength, while Abdullah Abdullah wanted to go to a second round but have a power-sharing agreement without the vote."

In the United States, President Obama is considering whether to send more troops to Afghanistan to fight the Taliban insurgency there, as requested by the commander of troops there, Gen. Stanley McChrystal, or adopt some other strategy in the troubled nation.

Khalilzad said the outcome of the Afghan election negotiations is crucial to whatever decision the U.S. president takes.

"There are very few very capable Afghans, and they need to come together in a power-sharing arrangement," he said, "because whatever the decision is here in the United States, this will be one last chance to push for success in Afghanistan. And that cannot happen without the Afghan leaders doing their part."