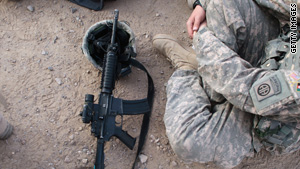 A U.S. Army soldier sits with his rifle on the ground during a meeting of Pashtun leaders Monday in Afghanistan.
STORY HIGHLIGHTS

Washington (CNN) -- The Pentagon on Tuesday identified four U.S. Marines who died in one of two helicopter collisions Monday in Afghanistan.

Ten Americans died in the second crash, including three Drug Enforcement Administration special agents. They were the first DEA agents to be killed in Afghanistan. Their names and those of the seven other victims have not been released.

The 14 deaths were the largest number of Americans killed in Afghanistan in a single day in more than four years, according to CNN records.

The four Marines were killed when two helicopters apparently collided in the air in southern Afghanistan. Two other NATO service members were injured.

"The incident is currently being investigated, but it is confirmed that hostile fire was not involved," the International Security Assistance Force said.

The ISAF said enemy action was not thought to be the cause of the other, more deadly crash, either.

The helicopter in the crash that killed 10 was returning from a raid on a compound believed to be harboring insurgents tied to drug trafficking. The crash was in western Afghanistan. Seven U.S. service members and three U.S. civilians were killed, according to an ISAF statement.

The militants were killed in a firefight when they confronted the joint force, ISAF said. As the force was leaving, a helicopter "went down due to unconfirmed reasons," ISAF said.