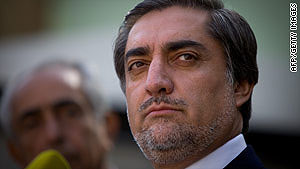 (CNN) -- The candidate who will face Afghan President Hamid Karzai in a runoff election next month has said he will not join Karzai's government if the incumbent wins another term, but instead will remain in opposition.

Abdullah Abdullah, who served as foreign minister in Karzai's government until quitting nearly four years ago, said he would congratulate Karzai if he "is elected through a transparent and credible process."

"My trust in becoming a candidate was not to be part of the same government, part of the same deteriorating situation," told CNN's John King in an interview taped for broadcast on Sunday's "State of the Union."

Abdullah and others charged massive fraud in the August 20 vote. The initial results gave Karzai the win, but a subsequent review by a U.N.-backed panel of election monitors threw out nearly one-third of Karzai's votes because of "clear and convincing evidence of fraud."

The result left Karzai short of the 50 percent need to avoid a runoff. After a flurry of meetings with U.S. and U.N. officials, the Afghan president agreed to the November 7 vote.

In a separate CNN interview to be broadcast Sunday on "Fareed Zakaria GPS," Karzai insisted that while there were "mistakes" and "some incidents of fraud" in the election, "the election as a whole was clean."

"To call this as clean elections, I think this, with all due respect to Mr. Karzai, it's a bit of ignorance," he told King, adding that "unfortunately, the government was involved."

"Yes, it was a step forward that the people of Afghanistan participated in the elections," he said.

"One chapter is behind us," he said. "It led to the runoff. And we need to get it corrected in order to open the door for the new chapter. So denying it is not a solution. Rather admitting it and correcting it, that will be responsible leadership."

Karzai said the second round of voting must take place or else "we would be insulting democracy." But he also said he had decided after agreeing to the runoff that "all that was said (about fraud in the election) was mostly wrong."

The Taliban called for a boycott Saturday of Afghanistan's upcoming presidential run-off election and repeated threats to disrupt the vote.

"The Islamic Emirate is once again warning all the compatriots to not participate in that American fraud process, and like the first round, they have to listen to their consciences," said a Taliban statement.

It said the Taliban is ready to "collapse" the electoral process and any participant who gets hurt will only have themselves to blame.

Meanwhile, in Washington, U.S. President Barack Obama's special representative to Pakistan and Afghanistan, Richard Holbrooke, said that the election process had worked as it was supposed to.

"From the beginning ... I said publicly that this election would be imperfect," Holbrooke said. "I said it on the record. And there were many irregularities. But in the end, the process worked, and I want to stress that. The Election Complaints Commission declared that neither candidate got 50 percent, although one came very close, and that the top two candidates were President Karzai and Dr. Abdullah and they should have a runoff."

Holbrooke added that it was "reasonable to hope" for fewer irregularities in a runoff.

CNN's Chris Lawrence and Thomas Evans contributed to this report.