(CNN) -- An Irish priest was kidnapped Sunday in the southern Philippines, his missionary society said. 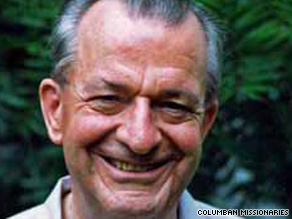 Father Michael Sinnott, part of the Missionary Society of St. Columban, was kidnapped at about 7:30 p.m. local time "from outside his home in Pagadian City, Province of Zamboanga del Sur, Mindanao, as he was taking an evening stroll in the garden," the society said.

"Four or five armed men burst into the garden and bundled [Father] Michael into a pickup truck and drove to a local beach. The vehicle was abandoned and burnt. [Father] Michael was taken away in a speed boat."

The Mindanao area has been gripped by violence and repeated kidnappings as government forces battle Islamic militants who seek a separate Islamic state.

The United Nations Office for the Coordination of Humanitarian Affairs has described dire conditions in the region, with hundreds of thousands of people displaced, many of them staying at evacuation sites.

All About United Nations Office for the Coordination of Humanitarian Affairs