LAGUNA DE BAY, Philippines (CNN) -- Water is a lifeline for the farmers and fishermen who live along Laguna de Bay, the largest lake in the Philippines. The rich ecosystem also serves as a reservoir to catch floodwaters to save Manila, on its western shore, from drowning. 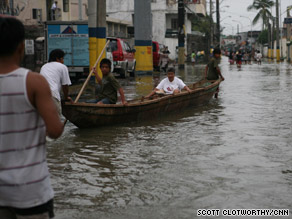 People use a canoe to cross floodwaters in Manila's Laguna de Bay neighborhood.

But water became the Philippines' biggest enemy last week as Typhoon Parma dumped as much as 36 inches of rain in some parts of this nation of islands, compounding misery in areas already flooded by earlier storm Ketsana.

Fears of disease are rising. So are the tempers of residents, who blame the government for doing too little too late.

Parma made landfall Saturday in Cagayan Province in the northern Philippines, with maximum sustained winds measured at approximately 148 kph (92 mph). The Philippines National Disaster Coordinating Council reported that the storm affected more than 338,000 people, displaced 85,000 and killed at least 16.

Tuesday morning, Parma, known locally as Pepeng, was still hovering off the northwestern coast of the Philippines with wind gusts up to 135 kph (84 mph).

Its predecessor, Ketsana, affected more than 3.9 million people, displaced more than 335,000 (many of whom remain in shelters) and left 295 dead. It swallowed homes and buses, and dumped more rain on Manila than it has seen in 40 years, leaving 80 percent of the bustling capital submerged.

The water -- rancid, stagnant, infested -- has now been standing for 10 days. Read about the fate of a farming community in Cagayan

As many as 2 million homes are partly submerged in metropolitan Manila, according to the government. People wade through the murky stuff in flip-flops or bare feet. They use tractors, boats and makeshift barges to navigate the main thoroughfare.

Wooden furniture stands soaked, on the verge of rotting. Valuables like stereo systems sit atop chairs and tables, and families have been sleeping on elevated beds. Garbage is clogging the city's aged drainage and sewage systems.

Manila generates 6,700 tons of trash a day, estimates the Asian Development Bank. Much of it is dumped on the streets or illegally into waterways, all of it under water now. Children play -- some with water guns -- in it, as though it were the neighborhood swimming pool.

Fears of water-borne disease have permeated the area.

"All the children have diarrhea," said resident Jojo Gadista, who, like everyone else, has floodwater inside his house. "I don't know how to fix the situation."

Parma is forecast to remain almost stationary over the next 24 hours. That means more rain will surely fall in the northern Philippines. Scattered storms are forecast for Manila.

The government offered a grim prognostication.

Defense Secretary Gilbert Teodoro, who is in charge of relief operations, said the water may not fully recede until Christmas.

"That is why we have to work to try and dredge things and try to clean up," he said.

But many poor families are desperate to get their lives back. Hundreds of people waited at a bridge for government boats. Some were there all night. They were promised food at 10 in the morning. At 4 p.m., they were still waiting.

They stretched their arms when a private relief truck stopped to hand out to each person two packages of noodles, a bottle of drinking water, a canned good, rice and coffee -- donations from wealthy Filipinos.

Teodoro said many people in cities and towns around Laguna de Bay opted not to evacuate; that it was a challenge to ensure their safety.

"They really will not leave their most valuable worldly possessions," he said.

When you are poor, it is hard to leave the only thing you have, Gadista said.

"This is where our livelihood is. We can't leave this place."

This place, where normally, water is a godsend.

CNN's Eunice Yoon and Pamela Boykoff contributed to this story.