TOKYO, Japan (CNN) -- Former Japanese Finance Minister Shoichi Nakagawa, who resigned from his post after appearing intoxicated at a news conference earlier this year, was found dead in his home Sunday, police said. 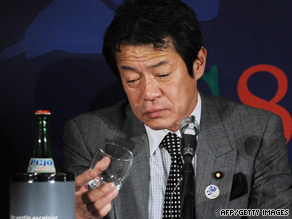 The cause of death was not clear and no will was found, police said.

Nakagawa's resignation followed an announcement by Japan's main opposition party that it would introduce a motion to censure him.

He had apologized for his behavior, but denied that it was the result of heavy drinking. Nakagawa said he had alcoholic drinks on his flight to Rome and during the G7 luncheon, but that the real culprit was too much medicine taken because he wasn't feeling well, Japan's Kyodo news agency reported.

In video of the news conference, Nakagawa responds slowly to reporters questions, slurring his words. At one point, he closes his eyes.

The G7 meeting brought together finance ministers from the world's leading industrialized nations in Rome.