LONDON, England (CNN) -- Scientists have discovered a new species of giant rat in a remote rainforest in Papua New Guinea. 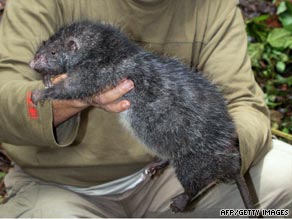 The newly discovered rat is similar in size and weight to this one found by scientists in 2007.

Measuring 82 centimeters (32.2 inches) from nose to tail and weighing around 1.5 kilograms (3.3 pounds), the species is thought to be one of the largest rats ever to be found.

The discovery was made by a team from the BBC Natural History Unit inside the crater of Mount Bosavi -- an extinct volcano in the Southern Highlands province of Papua New Guinea.

"This is one of the world's largest rats. It's a true rat, the same kind you find in the city sewers," said Kristofer Helgen, a biologist from the Smithsonian National Museum of Natural History, who was part of the expedition team.

Initial examinations of the rat -- provisionally named the Bosavi woolly rat -- suggest that it belongs to the Mallomys -- a genus of rodents in the muridae family which are the largest living species of rodent.

In 2007, a similar species of giant rat was found in the Foja Mountains in the Papua province of Indonesia in New Guinea Island.

The team of scientists which made the new discovery included experts on bats, birds, mammals and reptiles found a number of new species.

George McGavin, a Research Associate at the Oxford University Museum of Natural History and The Department of Zoology of Oxford University told CNN: "It's hard to be sure exactly how many new species we have found, but it is more than 30.

"To find new species of insects in this region isn't uncommon, but we found sixteen new frog species, one new bat species and at least three new fish, and this giant bloody rat -- the size of a cat. Amazing!"

McGavin said the inside of the crater -- which he says measures around three kilometers in diameter -- was spectacular.

"The animals inside this crater were unafraid of humans, pretty much because they hadn't seen them very much," McGavin said.

Most local inhabitants, McGavin explained, tend to hunt outside the crater. "They don't really go into the crater to hunt because it's such a trek up and back down from it."

The newly discovered rats aren't the world's largest rodent species. Native to South America, capybaras -- which look more like hairy pigs than rats -- weigh in at around 55 kilograms and can be up to 1.5 meters long.

McGavin and the team spent six weeks in the region investigating species. During that time it became abundantly clear to the team just how endangered these habitats are.

"What we are trying to do," said McGavin, "is highlight the fact that these habitats are terribly threatened. In fact, only 20 miles away from where we were the wood was being extracted."

Research published in the journal Biotropica in June 2008 estimated that over a quarter of Papua New Guinea's forests had been either destroyed or damaged between 1972 and 2002.

"Humans can't seem to agree on anything, but we should at least agree that forest habitats like this one should be conserved; not only because 80 percent of the world's species live in forests, but if we are going to avoid the worst affects of global warming we've got to keep these forests," McGavin said.

Next March, the team is traveling to Bhutan in search of more new species.

All About Nature and the Environment • Papua New Guinea