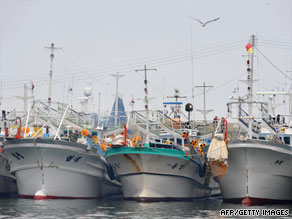 The Yeonan-ho and its crew were handed over to a South Korean patrol boat waiting at the sea border Saturday evening, Yonhap reported, citing South Korean maritime police.

South Korea's Defense and Unification Ministry said the 29-ton vessel had been returning from its fishing operations and mistakenly crossed seven miles into North Korean waters in the process, according to Yonhap.

South and North Korea have remained in conflict since the conclusion of the Korean War in 1953. The war ended in a truce but no formal peace treaty was ever signed.

Rapprochement talks between the two sides hit a wall after conservative South Korean President Lee Myung-bak took office in early 2008. He had a tougher stance toward the North than his liberal predecessor, Roh Moo-Hyun.

Several steps in the past week have hinted at a thaw in relations, however. Last week, the two sides had the first high-level, cross-border contact in nearly two years.

On Friday, the countries reached an agreement on future reunions for families separated for decades by the Korean War.

The agreement on reunions came after three days of talks between the two sides, mediated by the Red Cross, in North Korea, Yonhap reported.

Reunions will be held from September 26 to October 1 at Mt. Keumgang, Yonhap reported.