(CNN) -- China has launched an organ donation system that it hopes will eliminate illegal organ trading and encourage people to become donors, according to reports in China's state-run media. 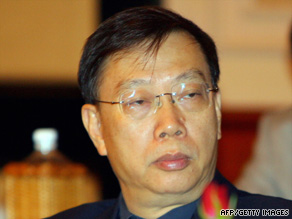 Health officials will start promoting the system in 10 provinces and cities, including China's largest city of Shanghai and the prosperous southern region of Guangdong.

Donating organs is not a widespread practice in China. Officials said last year, only 36 people donated organs -- out of a population of 1.3 billion.

The organ donation program -- which was unveiled on Tuesday -- will be "in line with the national conditions and international ethics," China's Deputy Health Minister Huang Jiefu said, according to Xinhua News Agency.

China has long relied on executed prisoners as its main source of organs for those in need of transplants, drawing widespread condemnation from international human rights groups.

That system failed to address the needs of the more than 1.5 million people in China who are in need of an organ transplant, according to the Chinese Medical Association's deputy director for transplanting.

"The huge shortage of organ donors and organs has created a significant black market for organs, which in turn has ruined public faith and willingness to donate organs," Chen Zhonghua told China's Global Times newspaper.

"There are already signs of backlash, with the nationwide number [of donations] falling last year to 36, from 41 the previous year, and only about 10 cases so far this year."

Only 11,000 transplant operations -- from both living and deceased donors -- are performed each year, according to Chen. More than 90 percent of those organs come from executed prisoners, according to the United Nations' World Health Organization.

In 2007, China introduced new regulations which banned organ trading and trafficking, and cracked down on "transplant tourism" by non-Chinese nationals.

W.H.O. praised the new regulations in a report released in December. W.H.O. said China has also made an effort to ensure that "altruism," and not financial compensation, is "the driving principle" for organ donors.

China's new regulations "have successfully established baseline requirements for medical institutions to do transplantations," W.H.O. said. The reforms have also led to a significant decrease in the number of organ transplants from cadavers, it added.

According to the W.H.O., "the number of living-related organ transplants [increased] by more than 100 percent in China in 2007."

Chen and other Chinese health officials hope the new organ donation system will help increase the number of organ donors, which is about 0.03 donors per 1 million people.

Only 130 organ transplants have ever been performed in China using donors who consented to have their organs used after their death, Chen said. He conceded that it will be a massive task to get China's organ donation program in line with other countries, such as Spain, which has 34 deceased donors per million -- the world's highest rate.

"It will take China five to 10 years to raise the number to 0.3 in 1 million people," Chen estimated.