(CNN) -- The United States is concerned that military cooperation between North Korea and Myanmar could destabilize the region, Secretary of State Hillary Clinton said Tuesday at a meeting of southeast Asian nations in Bangkok, Thailand. 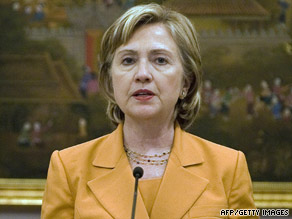 U.S. Secretary of State Hillary Clinton speaks during a press conference in Bangkok on Tuesday.

Clinton said the United States is aware of "growing concerns about military cooperation between North Korea and Burma, which we take very seriously."

Myanmar is also known as Burma.

"It would be destabilizing for the region, it would pose a direct threat to Burma's neighbors," Clinton said.

She singled out Thailand, a treaty ally of the United States, as a country that could be put at risk by increased cooperation between Myanmar and North Korea.

Clinton's remarks followed a recent incident in which the U.S. Navy tailed a North Korean ship that was thought to have been carrying weapons bound for Myanmar. The ship eventually reversed course and returned home.