(CNN) -- A cash-strapped Olympic hopeful in New Zealand says he has been forced to open a brothel to fund his bid for taekwondo glory in 2012, but officials say his entry into the sex trade could mean his exit from international sport. 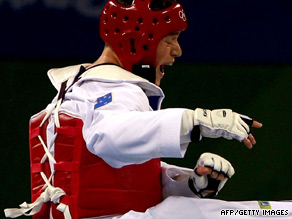 Logan Campbell represented his country in the Beijing 2008 Olympics.

Logan Campbell, who represented his country in Beijing last year, says without the financial injection from his "gentlemen's club" he will be unable to continue his intensive training for the London Games.

"There is no point me going to the Olympics to make up the numbers if I go I want to be a medal contender," Campbell told the local TVNZ network.

The 23-year-old, who finished in the top 16 in Beijing after losing his first match, says he needs to raise $190,000 over the next two years.

But his brothel business has upset his sport's national governing body, which says it could hurt his chances of competing. Sound off: Do you think a brothel owner should be allowed to compete in the Olympics?

"It may be unlikely that he will be selected because of his involvement," Taekwondo New Zealand's Secretary General Matt Ransom said.

Campbell insists he should be entitled to compete as his Auckland business does not violate New Zealand liberal laws on prostitution.

"This is perfectly legal, so I do not see why I would wreck my chances," he said, adding that if people had other ideas how to raise the cash, he would be willing to consider them.