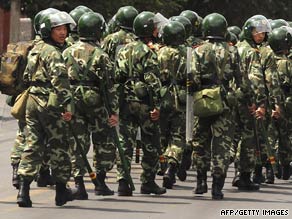 Chinese riot police patrol a street in Urumqi in Xinjiang province on July 6.

Streets had reverted to calm and curfews were in force in major districts of Urumqi as the death toll mounted from rioting.

Police halted people who had gathered in nearby Yili Kazak Prefecture and Aksu City and dispersed more than 200 people who had tried to gather in nearby Kashgar at the Id Kah Mosque, the largest mosque in China, the news agency said.

Along the road into Kashgar from the airport, many areas were deserted; residents said police had set up blockades in some areas and were rerouting traffic.

The regional public security department put the toll from riots at 156 deaths and more than 800 injuries, according to Xinhua, the state-run news agency.

Watch more on violence in Xinjiang »

That was an increase from the 140 deaths reported at noon Monday. "Among the 16 newly reported dead, some died in hospitals and others were recovered from street corners, the police said," according to Xinhua.

With a massive presence of soldiers and anti-riot squads, the government said Tuesday, the unrest in this capital of China's far-west Xinjiang region had been brought under control.

See a map of Xinjiang »

In a rare public display of dissatisfaction, thousands of Uyghurs -- many of whom feel they are treated as second-class citizens and complain of being discriminated against by the majority Han Chinese -- took to the streets Sunday chanting and screaming, which prompted a police lockdown of the city.

"Traffic control was partially lifted Monday morning in parts of Urumqi ... but tension still exists in the city," Xinhua said. "Debris has been cleared from the roads and normal traffic has resumed. Workers are still pulling away damaged vehicles from the worst-affected roads in the city."

Most businesses in the area where the violence took place remained closed Monday, Xinhua said. iReport.com: Are you there? Share photos, video, commentary

State-run media reported that protesters attacked passersby, burned public buses and blocked traffic Sunday. The report did not say how many people took part in the protest or what their grievances were.

But a witness in Urumqi told CNN that soon after the protest started about 5 p.m., hundreds of protesters "grew into easily over 1,000 -- men, women and children, all ethnic Uyghurs -- screaming and chanting."

Police arrived quickly and tried to control the swelling crowd by erecting barriers in the street, but "people pushed them over," the witness said. "They were throwing rocks at passing cars and buses." As the violence escalated, hundreds of riot police arrived, the witness said.

"They used tear gas and fire hoses to disperse the crowd. I saw fire trucks, ambulances, armed personnel carriers and what looked like tanks. I heard random gunshots."

Late Sunday, the witness said, Urumqi was in a lockdown, with hundreds of People's Liberation Army soldiers in the streets. He reported seeing riot police chasing protesters into alleys and rounding up many of them.

The witness speculated that the protest, which took place in the predominantly Uyghur-populated Bazaar district, may have been a reaction to racial violence in southern China.

The violence reportedly happened at a toy factory in Guangdong province, where many migrants, including Uyghurs, have moved in search of work. A massive brawl reportedly broke out between workers of Uyghur and Han nationalities. Two Uyghurs reportedly died.

Xinjiang is home to many Uyghurs. China's constitution guarantees ethnic minorities equal rights and limited autonomy. However, ethnic tensions run deep. Minority groups such as the Uyghurs complain that they are subjected to discrimination by the majority Han nationality.

The World Uyghur Congress, a dissident Uyghur group based in Munich, Germany, condemned the crackdown on what it described in a written statement as Sunday's "peaceful protest" by Uyghurs.

"The Chinese authorities should acknowledge that the peaceful protest was sparked by the unlawful mob beating and killing of Uyghur workers at a Guangdong toy factory more than a week ago," it said. "The authorities should also acknowledge that their failure to take any meaningful action to punish the Chinese mob for the brutal murder of Uyghurs is the real cause of this protest."

It accused Chinese authorities of having "used tear gas, automatic rifles and armored vehicles to disperse the Uyghur protesters. During the crackdown, some were shot to death, and some were beaten to death by Chinese police. Some demonstrators were even crushed by armored vehicles near Xinjiang University, according to eyewitnesses."

The government in Xinjiang blamed "foreign forces" for Sunday's rioting.

"The violence is premeditated, organized violent crime," said Nur Bekri, chairman of the Xinjiang Autonomous Region, the equivalent of a governor. "It was instigated and directed from abroad and carried out by outlaws in the country."

Bekri accused the World Uyghur Congress of spreading rumors and inciting anger that led to the rioting, in a speech carried by Xinjiang television.

The World Uyghur Congress denied the charge. It is led by Rebuya Kadeer, a businesswoman of Uyghur ethnicity who was detained in 1999 and accused of harming China's national security. She was freed on bail in 2005 and was allowed to leave for the United States for medical care.

Bekri accused Kadeer of instigating the unrest via the Internet and said the fight at the Guangdong toy factory was exploited to incite ethnic strife.

"We should bear in mind that stability is to the greatest interest of all people in China, including the 21 million-plus people from all ethnic groups in Xinjiang," he said.