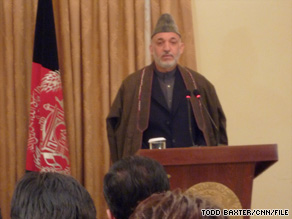 The U.S. military responded with a statement denying any involvement of coalition forces in the attack, which occurred at a Kandahar government office.

"Such incidents negatively impact the state building process in Afghanistan," Karzai said in a prepared statement.

He asked "coalition forces to avoid actions that weaken the government."

A U.S. military official with direct knowledge of the situation told CNN that his understanding at the moment was that the security forces accused of the attack included 40 Afghan nationals hired to do counterterrorism work with U.S. special forces. Without the assistance of any U.S. or NATO troops, the official said, the nationals tried to get a friend out of a Kandahar jail.

"This was entirely renegade," the U.S. official said. "It was not sanctioned or any part of any ongoing operation. This was independent action by these individuals."

The private security guards, according to the Afghan officials, had forced their way into the Kandahar attorney general's office demanding the release of an unidentified man. When the guards tried to use force to release the man, local judicial officials contacted the Kandahar police chief. Shortly after the police chief arrived, he and several of his bodyguards were shot to death.

In all, a half-dozen people were killed and several others were wounded, the government officials said. The Karzai government accused the U.S.-led coalition of protecting the security guards and began investigating the incident.

The United States never had custody of the guards, who fled after the attack, the U.S. military official said.

All About Afghanistan • Kandahar • Hamid Karzai