Two weeks ago in Pakistan a leading anti-Taliban cleric was killed by a suicide bomber. CNN's Senior International Correspondent Nic Robertson visited his son at the school where his father was killed and found surprises in security and nuances in attitudes toward suicide bombers.

(CNN) -- I first realized something was wrong when the hand-held metal detector didn't make a sound. 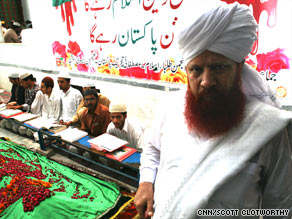 Students keep a vigil at Naeemi's grave. He built a network of religious schools across Pakistan.

There were three phones in my pocket, surely one of them should have triggered the guard's electronic wand to do something. Not a bleep, not even a twinkling LED.

It was all a little surreal. Here we were just feet from where a Taliban suicide bomber had blown himself up the week before killing the owner of the establishment and yet security was so lax his brother could have come in with a second pay load and no one would have been any the wiser until it went off.

The man the suicide bomber had come to kill was Mulana Safaraz Naeemi, the proprietor of the religious schools we were now entering.

Naeemi had built a vast network of religious schools, better known here as Madrassas, all across Pakistan. In Lahore alone he had more than 100, attended by as many as 100,000 young students. The one we were now visiting was the flagship, Jamia Naeemi.

As we moved inside, there arrayed around the open courtyard and in classrooms were his students, sitting on low benches at low tables rocking backwards and forwards memorizing the Quran. Apparently they had taken a two-day break after he had been killed and then gone back to their studies.

Naeemi's office was by the main door; his son Mulana Raghib Naeemi told me what happened.

He described how after leading the main weekly prayers on Friday his father had retired to his office, was sitting in his chair talking with his students when a young man came in and asked for him by name.

The man they now know was a Taliban killer asked for a glass of water, slowly drank it, dropped to one knee then detonated his explosive vest.

Naeemi's crime in the eyes of the Taliban was to issue a religious ruling, a Fatwa banning suicide bombing. He was a real threat, a top level cleric with a lot of pull. If young fanatics listened to him the Taliban would be without one of their best weapons.

Naeemi junior showed me the nuts, bolts, screws and ball bearings they had gathered from around the room, even found embedded in the store across the road. Everything that had spewed from the Taliban bomb.

Then he delivered his own stunning secret and even now it feels surreal. He tells me his father could have had security but had turned it down choosing to put his faith in God. It sort of explains the lack of attention to detail by the guard on the front gate.

At least I thought that was the scoop until I started asking Naeemi junior more about the suicide issue. His father had a huge following and Naeemi told me he was committed to following in his footsteps. To do anything else, he said, would be to turn the country over to the Taliban and anarchy.

Then he told me suicide bombings in Afghanistan against U.S. and NATO troops are justified because they are invaders killing Muslims. That is when the penny dropped so to speak. A question I'd had for a while just got answered.

While Pakistan and Pakistanis are more committed than they have ever been to crushing their own internal Taliban problem, they are far from turning on the Taliban across the border in Afghanistan.

Inside Pakistan the sentiment is clear; the Taliban are a menace to stability. Outside the country however they are still seen as a tool to achieve regional goals.

Pakistan, it appears, is still pursuing historic national interests, what they call having "strategic depth." Simply put to have a stake in who runs Afghanistan.