Mike Chinoy: TV news was going to change everything

(CNN) -- For Mike Chinoy, CNN's Beijing bureau chief at the time, one of the most significant moments in that heady spring of 1989 in China happened at 2:30 a.m. Beijing time on the morning of June 4, as the crackdown was taking place. 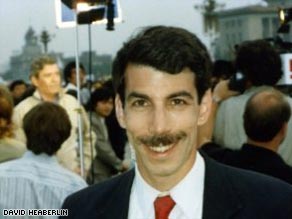 Mike Chinoy: "I described the gunfire and the bodies."

Chinoy was on the balcony at "Tokyo base" -- the network's nickname for its makeshift bureau at the Beijing Hotel down the avenue from Tiananmen Square -- watching soldiers march into the square with guns firing.

He was also constantly on the phone with CNN Atlanta, giving the network live "beeper" updates on what was happening there.

CNN's live video capability had long been pulled by the Chinese authorities. And CNN's first pictures from the square had already been confiscated.

But Chinoy, a long-time China watcher in the midst of the biggest story he had ever covered, was keeping the network and its viewers updated by phone.

"The assault on Tiananmen Square was under way," Chinoy recalls. "I could see a lot, but not everything. I was just describing what I was seeing, and passing on what colleagues were sending. I had a telephone line that could be kept open."

And then at 2:30 a.m., Ralph Begleiter, CNN's State Department correspondent at the time, started his talk show, which was featuring U.S. Secretary of State James Baker as its previously scheduled guest. Before Begleiter began interviewing Baker, though, he went to Chinoy in China for the latest on what was happening in Beijing.

"I described the gunfire and the bodies," said Chinoy.

Watch Mike Chinoy reporting on the crackdown in Tiananmen Square »

"And then Begleiter asked Baker what America's policy on the crackdown was."

"Baker was flustered," Chinoy recalls. "He didn't know what was happening yet. The U.S. embassy hadn't submitted any reports. He hadn't had time to think it through."

It was in that moment that Chinoy realized that television news -- and the 24-hour news cycle CNN had pioneered -- was going to alter everything.

"It showed the way this live, real-time news on television was going to change the dynamics of how major players responded to dramatic events and crises," said Chinoy. "It was a watershed in the information revolution."

Mike Chinoy is now an author and Senior Fellow at the Pacific Council on International Policy, based in Los Angeles.