(CNN) -- Military personnel threw away, and ultimately burned, confiscated Bibles that were printed in the two most common Afghan languages amid concern they would be used to try to convert Afghans, a Defense Department spokesman said Tuesday. 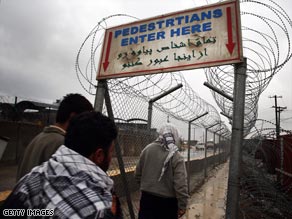 Afghan workers enter a walkway on March 3, 2009, at Bagram Air Base, Afghanistan.

The unsolicited Bibles sent by a church in the United States were confiscated about a year ago at Bagram Air Base in Afghanistan because military rules forbid troops of any religion from proselytizing while deployed there, Lt. Col. Mark Wright said.

Such religious outreach can endanger American troops and civilians in the devoutly Muslim nation, Wright said.

"The decision was made that it was a 'force protection' measure to throw them away, because, if they did get out, it could be perceived by Afghans that the U.S. government or the U.S. military was trying to convert Muslims," Wright told CNN on Tuesday.

Troops at posts in war zones are required to burn their trash, Wright said.

The Bibles were written in the languages Pashto and Dari.

This decision came to light recently, after the Al Jazeera English network aired video of a group prayer service and chapel sermon that a reporter said suggested U.S. troops were being encouraged to spread Christianity.

The military denied that earlier this month, saying much in the video was taken out of context.

"This was irresponsible and dangerous journalism sensationalizing year-old footage of a religious service for U.S. soldiers on a U.S. base and inferring that troops are evangelizing to Afghans," Col. Gregory Julian said.

The military says a soldier at Bagram received the Bibles and didn't realize he wasn't allowed to hand them out. In the Al Jazeera video, which shows the Bibles at the prayer service, an unnamed soldier says members of his church raised money for them.

The chaplain later corrected the soldier and confiscated the Bibles, Wright said.

Military officers considered sending the Bibles back to the church, he said, but they worried the church would turn around and send them to another organization in Afghanistan -- giving the impression that they had been distributed by the U.S. government.

That could lead to violence against troops or U.S. civilians, Wright said.

Al Jazeera English, a Qatar-based international news service, said its reporters tried to get a response from military officials for its story but were unable to do so.

The U.S. military air base at Bagram is home to thousands of troops from all branches of the U.S. military. The vast majority of the troops do not leave the base and are in various support roles for U.S. troops across Afghanistan.

CNN's Mike Mount at the Pentagon contributed to this report.