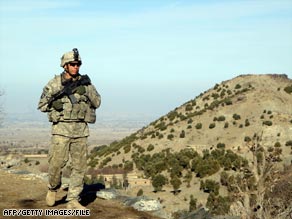 A U.S. soldier on patrol in Khost province in February 2009.

The insurgents attacked a municipal building in the center of the city of Khost, a U.S. military spokesman said. At least 10 suicide bombers were killed in the attacks, which also left five troops and four civilians dead, Afghan police said.

A U.S. military spokesman said the city -- a hotbed of Taliban activity --remained volatile as reports of running battles, kidnappings and fatalities surfaced.

Tuesday's fighting began when U.S. forces responded to a suicide bomber at a government compound in the city and came under heavy attack, the U.S. military spokesman said.

A Taliban spokesman in Afghanistan earlier told CNN 30 Taliban fighters were involved in the attack, and confirmed they were suicide bombers wearing explosive vests.

The U.S. military spokesman said U.S. troops killed several militants but had to fall back.

A U.S. quick reaction force from a nearby base was called in, entering the city with U.S. ground forces, he said.

CNN's Barbara Starr and Tomas Etzler contributed to this report