ISLAMABAD, Pakistan (CNN) -- Pakistani authorities on Thursday deployed paramilitary troops to a district, only 96 kilometers (60 miles) from the capital, where Taliban militants appeared to be consolidating control after this week's landgrab. 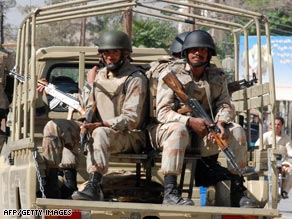 Pakistan has deployed paramilitary troops to a district taken over by the Taliban.

However, a highly placed Buner official said the judges left voluntarily after meeting with Taliban leaders.

A van carrying Frontier Corps paramilitary troops through the district came under fire Thursday. One police official was killed and another wounded, authorities said.

He said the government was monitoring the situation closely, and talks were under way among community elders, the civilian administration and the Taliban.

"Taliban is only in control of 25 percent of Buner district," Abbas said. "The Taliban will either move out or they'll be thrown out, one way or another."

The militant group's leaders met with community elders and the civilian administration Thursday and agreed that its members will not move about openly with guns nor will they disturb police, courts, schools, hospitals or non-governmental organizations.

The takeover of Buner brings the Taliban closer to the capital, Islamabad, than it has been since the insurgency started.

Watch residents react to news of the Taliban approach »

The Taliban commander in Buner, Mowlana Mohammed Khalil, gave a statement before Pakistani television cameras Wednesday, appearing with his face hidden behind a cloth mask.

"We came here only to preach Islam," Khalil said. He added that his fighters were carrying weapons only because they were an important symbol for Muslims.

The militants said they took control of the Buner district to ensure that Islamic law, or sharia, was properly imposed. The Pakistani government called the advance into the district a breach of a recently signed peace agreement.

Residents of Buner said the militants had set up checkpoints and were patrolling streets throughout the district.

"This is an open violation," Babik said. He said it was the government's duty to re-assert its authority in the region and added that troops were being mustered to resist the Taliban.

"We are collecting from different parts of the province," he said.

A few hours' drive away, in the Pakistani capital, salesmen hawking Urdu newspapers in morning traffic on Thursday called out headlines over the din of car engines. IReport: Should the U.S. intercede in Pakistan?

On Wednesday, U.S. Secretary of State Hillary Clinton warned that Pakistan was in danger of falling into terrorist hands because of failed government policies and called on Pakistani citizens and expatriates to voice more concern.

"I think that we cannot underscore the seriousness of the existential threat posed to the state of Pakistan by continuing advances, now within hours of Islamabad, that are being made by a loosely confederated group of terrorists and others who are seeking the overthrow of the Pakistani state, a nuclear-armed state," Clinton told the House Foreign Affairs Committee in her first appearance before Congress since being confirmed.

Mike Mullen, U.S. chairman of the joint chiefs of staff, was in Islamabad on Wednesday to meet with Pakistani officials.

Taliban militants implemented Islamic law in Pakistan's violence-plagued Swat Valley last week before taking control of the neighboring Buner district. But Pakistan's ambassador to the United States, Husain Haqqani, told CNN on Wednesday that the situation was not as dire as Clinton described.

"Yes, we have a challenge," Haqqani said. "But, no, we do not have a situation in which the government or the country of Pakistan is about to fall to the Taliban."

Taliban fighters moved into the Swat Valley as part of a peace deal with the government that has come under fire from U.S. observers. But Haqqani compared it to the deals U.S. commanders in Iraq made to peel insurgents away from Islamic jihadists blamed for the worst attacks on civilians there.

Prime Minister Syed Yusuf Raza Gilani said at a news briefing Thursday: "I want to explain to the West and Hillary Clinton about the agreement. ... The agreement is actually a very good thing. ... It brings two parties to an agreement based on mutual understanding."

"We have to establish control of government in Malakand division," which includes Swat, he said. "If peace is not restored in that area [Malakand], certainly we have to review our policy."

"If there is an effort of Talibanization, we have the right to review our policy."

CNN's Elise Labott and Samson Desta contributed to this report.