(CNN) -- Former Secretary of State Madeleine Albright said Tuesday that North Korean leader Kim Jong-Il is using his claims of a successful rocket launch to shore up his political strength within his country. 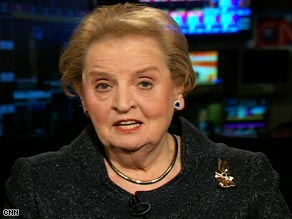 Albright, who was secretary of state in the Clinton administration, told CNN's "American Morning" that "it was a huge mistake for the United States to stop talking to North Korea" when the Bush administration took over.

The communist nation launched the rocket over the weekend in defiance of international opposition. Satellite images released Monday appear to show the rocket in flight, according to a nonprofit institution that focuses on stopping the spread of nuclear weapons.

The following is a transcript of Albright's conversation with CNN's Carol Costello.

Carol Costello, CNN: We do have this video from North Korea of this rocket taking off. What do you make of that?

Former Secretary of State Madeleine Albright: Well, I think that the North Korean leadership is living in a parallel universe of acting as if the launch was a success, when tracking and everything has shown that in fact, it is a failure.

And I think it proves a point, which is that the North Koreans, Kim Jong-Il is doing this for his own internal reasons -- because on Thursday, tomorrow, there will be a rubber stamp by the parliament of his leadership -- and the problems that he's generally had since he had his stroke. So this is part of their kind of Orwellian approach of saying that "This is what happened, and wasn't it a success," when we know it wasn't.

Costello: The U.N. Security Council hasn't been able to come up with any sort of resolution because apparently that body is split. President Obama made a really big deal of this and said this was like a clear violation. It sort of seems like the United States is stuck, and it can't do anything about North Korea.

Albright: Well, I don't think that's true, because what has happened is there have been individual condemnations by leaders of various countries. And I have to say from my own experience of the United Nations, it does take a while to get the 15 members [of the Security Council] together. But the saddest for me is the fact that the U.N. passed a resolution, 1718, which said that this was not acceptable. So the truth is that the U.N. has to live up to its own resolutions.

And Ambassador Rice, I think, is working very hard up there in order to get some action, but there have been condemnations already throughout the world. And the bottom line here is that President Obama's speech, for instance, in Prague, when he talked about the importance of cooperation generally on a whole nonproliferation regime -- it's very clear that there's going to have to be a lot of work on that and that President Obama laid out a very, very important set of goals.

amFIX: Your thoughts on the rocket launch

Costello: And, you know, there has been some criticism that President Obama turned to the U.N. to try to solve this crisis. I want to read you a quote from Politico. It interviewed Newt Gingrich, the former speaker of the House. I want to read you his quote. Newt Gingrich said, "The embarrassing repudiation of the United States appeal to the United Nations Security Council Sunday afternoon is a vivid demonstration of weakness. This is beginning to resemble the Carter administration's weakness in foreign policy." How would you respond to that?

Albright: Well, I think that it's just kind of typical of Newt Gingrich, frankly. But the bottom line here is, I think the United States and President Obama has made very clear the leadership of the United States, his concern about, generally, proliferation issues.

I think his trip, for instance, laid out a whole set of issues that prove that American leadership is essential, the respect that he gained for American leadership. And I think you're going to see additional ways that we all work together, because the issues that are out there that have to be dealt with require cooperation, and they will require international organizations and cooperation through NATO and a number of activities. So I'm very confident that President Obama is going to be able to prove American leadership.

Costello: Well, I guess many Americans look at it this way, you know: You talk about sanctions, but sanctions have been instituted against North Korea before, and it hasn't really worked. North Korea just seems to kind of do what it wants. You've met Kim Jong-Il. I mean, what does he want?

Albright: Well, what he wants is respect. And I have to say that part of the problem here is -- and as you mentioned, I met Kim Jong-Il. We were in the middle of negotiations with him. In fact, we had a missile moratorium.

And President Bush came in and canceled those talks. It was confusing to everybody. And I do think that what is important now is to get the North Koreans back into the six-party talks, to make it clear to them that the only way that they are going to have respect is to abide by international regulations and to try to deal with the fact that they would be better off if, in fact, they allowed their people to be fed and an economy that functions, rather than be living in this way where poverty is rampant, and hunger, in every way in North Korea, and a leadership that is shaky.

But the bottom line is, I think it was a huge mistake for the United States to stop talking to North Korea. And in the interim period, they were able to develop material in order to create nuclear weapons, and so I hope very much that the six-party talks continue.

Costello: We'll see. Madam Secretary, thanks so much for joining us this morning. We appreciate it. Thank you.