Taliban poised at the gates of Kabul

KABUL, Afghanistan (CNN) -- A top Taliban commander has told CNN his insurgents are poised and ready to attack Kabul and could strike virtually anywhere in the city. 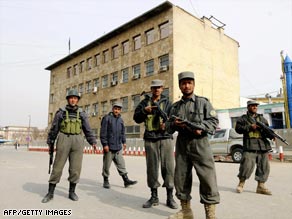 It would be tempting to put this down to Taliban propaganda except one of Kabul's top cops is saying the same thing.

"We are working on a security strategy for the city and if we don't get it right, they [the Taliban] can attack at any minute, at any hour, any time," says Commander Mohammed Daud Amin, in charge of securing the Kabul district that includes the Presidential Palace and many government ministries.

Proof of the menacing threat came just last month when eight Taliban fighters, bristling with weapons and suicide vests, burst into three government buildings in the center of Kabul.

Police and security forces managed to kill all the insurgents before they could detonate their vests, but 20 people were killed and dozens were wounded.

The attack took many by surprise and it underlined the credibility of Taliban threats. It was also seen as one of the most direct attacks on the government of President Hamid Karzai and gave new authority to claims that the Taliban are isolating the capital, one of the last bastions of security in Afghanistan, compromising many routes in and out of the city.

"Staff... staff," Amin points to pictures of dead Justice Ministry staff from his evidence book of the crime scene of last month's attack. With every page, the carnage is laid bare. There are several pictures of government employees shot dead as they worked, blood splattering the ministry walls and floors.

Watch Amin pore over photos of the bloodshed »

As Amin continues to flip through the book, he reveals pictures of dead militants and many of those images defy description. In one picture, the militant is missing an arm, which Amin says was torn off as he detonated a hand grenade. In other pictures there are few body parts that can be discerned, save for the militant's head.

"Police went looking for the insurgents and they went after them inside. We are convinced the insurgents wanted to hold ministry employees hostage." says Amin.

Many in Kabul applauded the courage and tactics of individual officers in their handling of the ministry attack. Amin says he and his men managed to prevent a deadly and prolonged hostage situation

One of his men is 22-year-old Ahmed Zahir. We found him patrolling the streets of Kabul just outside the Presidential Palace walls. He describes what happened to him that day as dozens of people started pouring out of the Justice Ministry and running towards his police post in a panic.

Zahir says he ran into the ministry building and was caught in a firefight, eventually killing one insurgent. While his courage seems commendable, his disillusionment over how his superiors responded to his efforts is less so, and his reactions are disturbing. "The government didn't thank me and they did not help me afterwards," says Zahir, with evident bitterness.

By help, he means money. Police in Kabul earn less than $200 a month, considerably less than it costs to live in the capital, even for those not supporting a family.

With low wages comes low morale and an invitation to corruption -- Afghanistan's police are regularly accused of being on the take.

And yet their jobs couldn't be more crucial in trying to keep together the country's fragile security.

Take Kabul, a city clogged with somewhere between four and five million people -- no one knows for sure -- and traffic to match that human crush. It's not hard to see how eight Taliban fighters seemed to so easily slip into the city last month. "They used government cars with tinted glass and we have no authority to stop them" says Abdulla Mahbob, a police officer at one of Kabul's key checkpoints.

Still, coalition forces have no choice by to keep rooting for Kabul's cops. By the end of the year, NATO will hand over much of the responsibility for securing the capital to the city's police force. And that will be a crucial test to see if this city and this country can stand on its own, even with the Taliban standing at the gate.