KINGLAKE, Australia (CNN) -- Two men, who were arrested Thursday in connection with the deadly wildfires that have swept through southeastern Australia, were released without being charged, police said. 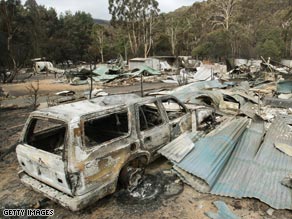 Bushfires have destroyed huge tracts of the Australian countryside.

Victoria state police had told CNN that the two -- who had been taken into custody and were "assisting" police earlier -- had been behaving suspiciously in or near Marysville, a town where roughly 100 people have died in the fires.

It was not immediately clear what the behavior was or why the men were released.

Meanwhile, authorities said they fear the death toll from the fires, which sat at 181 on Wednesday, could reach as high as 300.

Authorities are basing that figure on the number of people who remain missing and the number of homes that have been destroyed. Rescue workers have not been able to thoroughly investigate many of those homes because of the intense heat.

Firefighters have battled blazes since Saturday -- including several new fires that broke out Tuesday night and which officials say almost certainly were the result of arson.

About 35 separate fires continued burning Thursday morning, authorities said. But none of those blazes posed an immediate threat to villages and their intensity had lessened, according to police.

Authorities were saying Wednesday that more than 500 people have been injured, nearly 1,000 homes destroyed, thousands left homeless and at least 365,000 hectares (901,935 acres) of the Australian countryside burned black.

Those numbers were expected to continue to rise Thursday.

Arson is thought responsible for all the destruction in the towns of Marysville and Kinglake. As many as half the homes in Kinglake have burned to the ground, police say.

Watch how survivors of the fires are facing looters, scammers and vandals »

John Brumby, the premier of the hard-hit state of Victoria, said many of 20 fires burning Wednesday were suspected to have been started by arsonists -- an act described earlier by Prime Minister Kevin Rudd as "mass murder."

"There seems little doubt these were deliberately lit -- a number of them last night," Brumby said on national television.

"I think words escape us all when it comes to describing deliberate arson."

Several fires started by lightning between the two blaze fronts were exacerbating the situation, she said.

In Marysville, officials warned that as many as 100 people, or one-fifth of the town's population, might be dead, with many bodies believed to be still buried under debris.

Likely to add to the fatality figure was the discovery by forensic scientists that some skeletal remains initially thought to be single bodies were actually two people fused together by searing temperatures.

As efforts to help those affected by the wildfires gather pace, tent cities have sprung up in Whittlesea, just north of Melbourne. Relief agencies have pitched camps for those forced out of their homes.

Many fire victims have grown increasingly frustrated, kept from returning home -- or to what is left of their homes -- by authorities because of safety concerns.

Watch a koala bear being rescued »

Fires were Wednesday threatening a gas plant and a reservoir supplying Melbourne, Cummings added. She said firefighters were counting on three days of relative calm weather before high winds were expected to fan flames again.