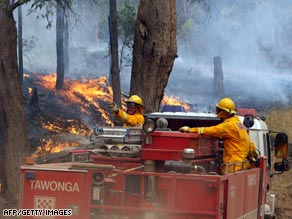 Firefighters try to stop a Kiewa Valley fire from reaching the town of Dederang in the Victoria Alps on Tuesday.

"The temperatures are much cooler, but the concern is there's still this wind which sort of fans the flames and keeps them spreading," said CNN Correspondent John Vause from Whittlesea, where tent cities have sprung up just north of Melbourne.

Relief agencies pitched camps for those forced out of their homes. At least 181 people have died from the brushfires.

Frustration also brewed as residents desperately wanted to return to their homes, or what was left of them, but were prevented by authorities because of safety concerns.

The toll from Saturday's inferno has grown day by day. Police in the state of Victoria put the number of deaths from the fires at 181 on Tuesday.

Watch survivors coping with the grief »

"We think there will be more deaths," Police Chief Christine Nixon said. "It's a major issue ... that we're finding more bodies as we gain access to locations."

But there was hope.

Watch an emotional reunion for a couple separated during the bushfires »

"We don't muck around in this country. It will be back to the same in 18 months," said Ash Phelin, a volunteer worker helping displaced families. "It might not look the same. It'll be a bit burnt. But it'll be back."

The scope and scale of the fire brought Monique Locklier to help her bush mates.

Watch a firefighter share his experience of the fires »

"It's up the road from where we live," she said. "It's the worst tragedy we've ever seen and I hope we never see it again." iReport.com: 'Thank God we were spared'

Charitable contributions continued to pour into the Salvation Army as Australians were touched by the crisis.

"We're in the midst of this huge financial crisis and people want to give," Major Rodney Barnard said. "The Salvation Army has been running an appeal and we've raised in excess of AU$2 million (US$1.3 million)."

The need for humanitarian aid is expected to be great, with Prime Minister Kevin Rudd laying out the costs of the fires before Parliament. In addition to those killed, more than 500 people were injured, nearly 1,000 homes were destroyed, thousands were left homeless and 365,000 hectares (901,935 acres) of the Australian countryside have been burnt black, he said.

"The seventh of February will become etched in our national memory as a day of disaster, of death and of mourning," Rudd said, as he announced that offers of assistance had poured in from around the world, including from France, Japan, New Zealand, Singapore, Thailand and the United States.

"All Victorians and all Australians should know that in this darkest hour, they are not alone," he said.

"I would like to express my deep, profound sympathy to you, the families and loved ones of the victims, and the Australian people," Merkel wrote. "To the wounded I wish a quick and full recovery."

Sarkozy also offered his support and suggested that the French island territory of New Caledonia in the Pacific could be used as a staging ground for supplies to Australia.