Afghan girls maimed by acid vow to go to school 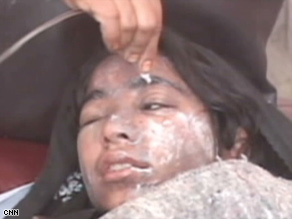 Shamsia and Atifa remain determined to get their education despite the attacks.

The 19-year-old was heading to school along with her 16-year-old sister, Atifa, in Kandahar, Afghanistan. It was a warm November morning last year and their only anxiety was being late for class.

"We saw two men up ahead staring at us. One was standing off and the other one was on their motorcycle. I wanted to go but there was a black object in his hand and he took it out," Atifa says.

The girls thought it was a water pistol.

They weren't the only ones attacked that day. Several other teachers and students were targeted on their way to Meir Weis Mena School in Kandahar, the nation's third-largest city and one where the Taliban have long been influential.

Atifa was burned so badly that her red scarf melted onto her dark brown hair.

Parents were so frightened that many students were kept at home for weeks afterward.

It's not the first time girls in Afghanistan have been targeted for attending school. The Taliban have been responsible for dozens of attacks on girls' schools and female teachers, but even they condemned this attack.

Kandahar was the headquarters for the Taliban during its five-year rule of Afghanistan and was home to Taliban Supreme Leader Mullah Omar.

During that time, girls were forbidden to attend school. If they tried to get an education, they risked beatings by the religious police, or worse. Parents and family members were threatened, and sometimes killed, for allowing their girls the chance to be educated.

Since the fall of the Taliban in 2001, the Afghan government has tried to extend access to education, with some success. About 6 million children attend schools throughout the country, 2 million of whom are girls, according to government figures.

The case of Shamsia and Atifa gained national and international attention. See how you can help

"A real man would never throw acid on the face of a little girl, a real man wouldn't even want to make a little girl unhappy," Afghan President Hamid Karzai said shortly after the attack. "Beside it being a cowardly act, it is an un-Islamic act."

Laura Bush, the first lady of the United States at the time who advocated for the education of girls in Afghanistan, called the attacks a "cowardly and shameful" act.

"My heart goes out to the victims and their families as they recover from this cruel attack," she said.

A few weeks after the attacks, the story took a strange turn.

The governor of Kandahar announced that 10 men had been arrested and some had confessed.

But none was seen until a video made by Afghan Intelligence was released by the Interior Ministry, and aired on Afghan State Television in late December.

One of the accused, Jalil, said in the video that a major in the ISI, or Pakistani intelligence unit, approached him and offered him the equivalent of $2,000 for each attack.

"He told me I will give 200,000 Pakistani rupees for a teacher's death, 500,000 for burning a school, and 100,000 for throwing acid on a schoolgirl," Jalil said, seeming frightened and agitated as he looked into the camera.

He said the major gave him a letter for the Pakistani Consulate in Kandahar, where he received the money.

But President Karzai seemed intent on defusing any tensions with Pakistan stirred by the release of the video.

During a news conference earlier this month in Kabul with Pakistani President Asif Ali Zardari, Karzai said that in this case, Pakistan displayed real cooperation to find the culprit. In the past, Karzai has often accused Pakistani officials of being involved in terrorism in Afghanistan and supporting the Taliban.

"For the first time, we had a very sincere and brotherly approach to the issue, which is of satisfaction to us and I hope we can succeed together," Karzai said.

Pakistani officials tell CNN that the claims about the consulate's involvement are "hogwash."

For once, the attacks have not set off tit-for-tat accusations between the Afghan and Pakistani governments, as both countries deal with the extremists working to keep girls from getting an education.

None of the men who appeared on the video has had his day in court.

The victims have their own ideas for justice.

"Their punishment should be that they should have acid thrown on their faces in front of me. Just like they threw acid on me, we should throw acid on them," Shamsia says.

But her greatest revenge, she says, is an education.

When asked if she would stop attending school, Shamsia was quick with her response. "Why wouldn't I want to come to school? I want our country to persevere. I have to do something for my country, I must go to school."

All About The Taliban • Afghanistan • Al Qaeda