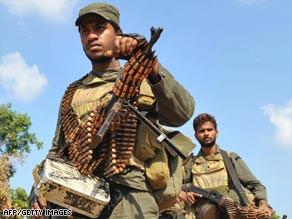 Sri Lankan army troops have had there most decisive victories against the Tamil Tigers in recent weeks.

The aim of these conspirators, he said in an address to the nation, "is to level unfounded charges against the army commander who works with greatest dedication to achieve these victories."

He also used the address to formally announce the recapture of the northern town of Elephant Pass, the point at which mainland Sri Lanka links to the northern Jaffna peninsula. It had remained in rebel hands for over nine years.

The recapture enable the government to use the A-9 highway linking the mainland to the peninsula to move troops and supplies. Until now it was done either by air or by sea.

Rajapaksa's remarks came amid mounting attacks on the media.

On Tuesday a group armed with rifles, pistols and grenades attacked the country's most popular privately owned television channel MTV.

On Thursday, Lasantha Wickrematunga, chief editor of The Sunday Leader, a newspaper which had exposed corruption and criticized aspects of ongoing military operations, was shot dead.

Earlier Friday, the leader of the main opposition United National Party (UNP), Ranil Wickremasinghe, accused military and security officials of the attacks, saying the government could not control them.

"Armed forces members are shocked about these incidents. The armed forces says due to the activities of few intelligence sections, the reputation of the country is being ruined. That is the team which the government has no control of," he told parliament.

Rajapaksa said there were efforts to belittle military victories "to turn the attention of the people to other directions."

He said such "conspiracies arise when a country moves ahead without giving in to external pressures."

He added "one must not mistake these conspiracies as being against me or my government. This is a conspiracy against the entire country by those who have been driven to fear due to the successes of our security forces."

Three members of the Sri Lankan air force and four civilians died when rebels exploded a claymore landmine in the village of Morawewa, near the northeastern port city of Trincomalee, police said. The strategic port town is located about 240km (150 miles) north of the capital, Colombo.

Friday's incident came as troops pursued their military campaign in the northern Wanni region to recapture remaining rebel strongholds, military sources said. Government troops were said to be meeting fierce resistance as they advanced on the Tamil stronghold of Mullaitivu and a naval blockade remained in the northeastern seas.

The 25-year long civil war has left more than 65,000 people dead. The U.S. State Department has designated the Tamil Tigers a terrorist organization.