KABUL, Afghanistan (CNN) -- Hundreds of people in southern Afghanistan have burned Israeli flags and shouted anti-Israel and anti-American slogans to protest Israel's military action in Gaza, according to eyewitness accounts from a CNN stringer. 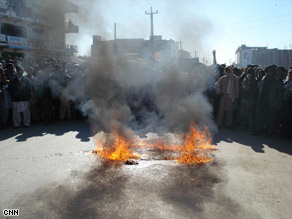 Council leaders in the provincial capital of Kandahar bellowed over loudspeakers on Monday to an angry crowd of about 700 protesters, calling for an end to the ongoing hostilities in Gaza.

Israel launched air attacks on Gaza nearly two weeks ago in an effort to stop months of rocket strikes on southern Israel by Hamas militants. It sent in ground forces late Saturday, resulting in mounting casualties in Gaza, where more than 500 Palestinians have been killed over the past week, according to Palestinian medical sources.

Four Israeli civilians and one Israeli soldier have been killed in recent fighting, according to Israeli Defense Forces. Another three Israeli soldiers died late Monday in a "friendly fire" incident in northern Gaza, the country's military said Tuesday. Watch a report on the continued fighting

Three Canadian soldiers were killed in mid-December after an improvised explosive device blew up near their armored vehicle during a patrol in central Kandahar, the Canadian Defense Ministry said

Last week, two improvised explosive devices detonated at a bazaar in the province, killing two civilians, including a child.

Twenty civilians and an Afghan border police officer were wounded in the attack in the town of Spin Boldak.

The violence was the latest blamed on the resurgent Taliban movement that once ruled Afghanistan.

The Taliban regime harbored the al Qaeda terror network before it was ousted from power in a U.S.-led invasion of Afghanistan after the 2001 attacks on the United States.