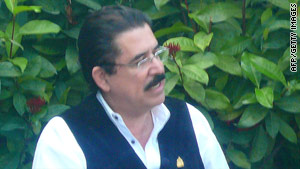 (CNN) -- Deposed Honduran President Jose Manuel Zelaya will not be reinstated as head of state, a majority of the Honduran congress voted Wednesday.

Of the 128 lawmakers, more than half voted in favor of a motion against the reinstatement of Zelaya.

In the Honduran chamber, lawmakers cast their vote one at a time and addressed the chamber as they did so, making for a slow process.

As of Wednesday evening, the voting was not over, but Zelaya's opponents tallied the simple majority, or 65 votes, needed to keep Zelaya a political outcast.

At the moment that Zelaya's detractors reached a majority, only eight lawmakers had voted to reinstate him.

Wednesday's vote was a key part of a U.S.-brokered pact that representatives for Zelaya and de facto President Roberto Micheletti signed October 29. The pact gave the Honduran congress the power to decide Zelaya's fate, rather than negotiate it directly within the agreement.

At stake in Wednesday's vote was whether Zelaya would be reinstated to carry out the remainder of his term, which ends in January.

Obstacles to implementing the October agreement were almost immediate, however, and Zelaya said he would not accept the post even if Congress voted him back in.

Accepting the job, he said, would legitimize the June 28 military-backed coup that ousted him and made Micheletti, formerly the congressional leader, the country's de facto president.

Wednesday's vote against Zelaya leaves a cloud of doubt over Lobo's legitimacy as president-elect. Many nations said before Sunday's election they would withhold recognition if Zelaya were not returned to power.

Despite the diplomatic pressure from abroad, lawmakers were voting the will of the people, Congressman Juan Angel Rivera Tabora said.

"History will judge us, and I'm certain it will judge us positively," he said. "Congress didn't make this problem. The problem came to us."

Those voting against Zelaya echoed those sentiments. After the coup, the same body voted to install Micheletti as interim president. Wednesday's vote happened only because the agreement between the two sides called for it, many lawmakers said.

Zelaya's supporters argued that the coup was an illegal act that only restitution could heal.

Congress sought opinions from the nation's Supreme Court and other bodies before holding the vote. The court ruled last week that Zelaya cannot return to office without first facing trial on charges that he acted unconstitutionally when he tried to hold a vote that could have led to the removal of presidential term limits.

The coup came on the day the term-limits vote was to have been held. The Supreme Court had ruled before the coup that the vote was illegal and Congress had forbidden it.

But the United Nations, the Organization of American States, the European Union and most nations -- including the United States -- condemned the coup over the summer and demanded that Zelaya be reinstated immediately.

Zelaya, who was flown out of the country while still in his pajamas on the day of the coup, has been staying at the Brazilian embassy in Honduras' capital since secretly returning to the country September 21.