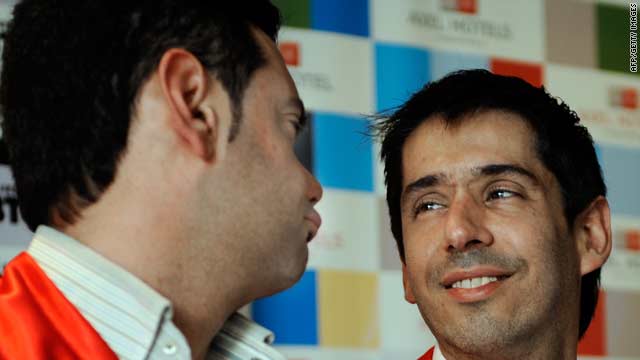 Buenos Aires, Argentina (CNN) -- Latin America's first same-sex marriage, set to be held in Argentina on Tuesday, appeared derailed after a judge filed an injunction to stop the union until the issue can be reviewed further.

Alex Freyre and Jose Maria di Bello had planned to make their marriage official at a civil ceremony and chose December 1 because it is World AIDS Day.

The registrar responsible for the civil marriages in Buenos Aires has been notified of the ruling, the court said.

The couple would attempt to get their wedding license anyway, the official Telam news agency reported.

"We're continuing with the preparations because we, as planners, nor the couple itself, have not been notified" of the injunction, said Maria Rachid, president of the Argentine Federation for Lesbians, Gays, Bisexuals and Transsexuals, according to the news agency.

Gomez Alsina's injunction could not overturn the earlier ruling because she is a trial-level judge and not an appellate judge, Rachid said.

The original ruling was made on November 10 by another trial-level judge, Gabriela Seijas, who responded to a petition made by Freyre and di Bello.

Seijas ruled that the ban on same-sex marriage was illegal and ordered the proper authorities to grant the couple a marriage license if they applied for one.

The court's decision applied only to Buenos Aires. Same-sex unions in most of Argentina remain illegal.

Buenos Aires Mayor Mauricio Macri said after the ruling that his government would not appeal the decision.

Monday's ruling was a temporary measure to postpone the marriage until Seijas' original ruling could be reviewed in depth, presumably by an appeals court or the supreme court, the court statement said