Editor's note: This article contains graphic images and video that some may find offensive. It's the last of a three-part series showing different aspects of life inside Colombia's drug gangs.

BOGOTA, Colombia (CNN) -- All that glitters may not be gold, but for Colombia's narco-molls the most important thing is that it glitters. 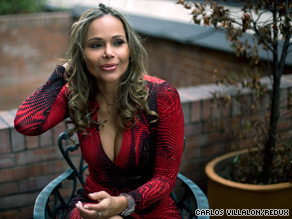 Yovanna Guzman was 19 when she met drug boss Wilber Varela, and she says he showered her with luxuries.

Beauty queens, fashion models, actresses or regular girls made good are lovers of drug capos and above all lovers of the finest luxuries that cocaine money can buy.

Few are prepared to speak publicly and even less to appear on camera.

Those who date mob bosses don't want to blow their cover. It could expose their boyfriends to arrest and themselves to retaliation. In addition, it could bring anti-drug police sniffing, ready to seize ill-gotten gains.

One exception is Yovanna Guzman, a former beauty queen and model, with a mane of blond hair and a pneumatic figure -- a sure passport into the narco underworld where cup size is more important than IQ.

For eight years, she was the lover of one of Colombia's most ruthless cocaine traffickers, Wilber Varela. He was head of the North Valle Cartel.

"He had two faces. I saw him so tender with the ones he loved, then you see the cartel killings. He always said he was the best of friends and the worst of enemies," Guzman said during an interview in Bogota.

Watch Guzman describe Varela and how she met him »

The Colombian government accused Varela of running tons of cocaine to the United States via Central America in go-fast speedboats and to Europe in small jets. Should drugs be legalized? Sound off below

Authorities put a $5 million bounty on his head. He gained a reputation for brutality during a yearslong dispute with a splinter faction of the same cartel, led by Diego Montoya, who until his capture in 2007 was listed alongside Osama bin Laden on the FBI's list of the 10 most-wanted fugitives.

Guzman was 19 when she met Varela. He told her he was a cattle rancher. She didn't ask questions and said she only found out the truth when she saw a Wanted poster with her boyfriend's mug shot.

He wooed her with expensive gifts and sponsored her through Chica Med, a second-rate beauty pageant organizers concede was viewed as a cattle market by gangsters looking for new girls. Some mob bosses bought the beauty title as a gift for their molls, though it's not clear whether Varela paid for Guzman's title.

"There were the vacations, the cars and the luxury SUVs and, of course, jewelry. There was always jewelry. But there were small details too like flowers," she said.

"Of course, the luxuries don't make you fall in love, but they do dazzle you. When you get dazzled, you get carried away, but then you ask yourself where is the love and my principles?"

Guzman said Varela's first gift to her was a Rolex watch, followed by a Cartier watch, diamonds, jewelry, top-of-the-range sport utility vehicles and luxury apartments. She said she now realizes she was being bought and admits she sold herself.

"I feel all of us have a price up to a point. Sometimes you feel luxuries like the designer clothes, shoes and handbags are important. But afterward you realize you're empty inside," she said.

Very quickly her drug lord boyfriend locked Guzman in a golden cage. He forbade her to do photo shoots or party with male friends, even though he had a stable of other top model girlfriends.

"He was very jealous, and what's his is his and belongs to nobody else and nobody can touch it, look at it or mess with it," she said.

As Colombia's law enforcers stepped up the hunt for Varela, Guzman's time with him became less frequent. But she said he always seemed to know where she was or to whom she had talked.

At one point, she said, a jealous Varela sent one of his lieutenants to shoot her in the leg.

"When I got shot, I was supposedly never going to walk properly again. The bullet could easily have hit me somewhere else and killed me. But I pulled myself together and I said I'm not going to be crippled," she said.

What Guzman wouldn't explain was the reason for the punishment shooting. She giggled and promised to reveal the full details in a book she's writing.

She said she hopes her experiences will serve as a cautionary tale for other young women on the trail of easy money.

Whether or not they will take a leaf out of that book is another matter. Ordinary Colombians seem to have an unshakable attraction to glamorous narco-lifestyles judging by the sky-high ratings of two TV soap operas.

The "Cartel" tells the story of the rise of the North Valle mob that Varela headed. The sequel, called "Mafia Dolls," portrays women such as Guzman.

One of the silicone-enhanced actresses who played a supporting role in both soaps said that since her TV appearances she has received offers from real-life drug dealers, both in Medellin and Cali.

"Those narcos watch TV and are always on the lookout for fresh meat. So I began getting the calls when I appeared in 'The Cartel,' " she said. "I got a phone call from a guy who is a showbiz publicist, and he told me a guy from Medellin was offering $7,500 for me to spend the evening with him."

She said she refused that overture. Days later, a new BMW X5 SUV, with a bow on top, was left outside her home by the same drug trafficker who was trying to woo her.

She said she returned the gift but gave no explanation how she found out the return address, given how secretive Colombian mob bosses are.

"All those narcos care about is how big your breasts are. If they want you, the first thing they do is send you to their plastic surgeons to have silicone implants. But it's them who decide how big you should be, not you," she went on.

Guzman dares tell her story now for a simple reason -- Varela is dead.

He was slain last year by one of his power-hungry lieutenants eager to take over the business. It marked the end of a nightmare she walked into with her eyes wide open.

"[When I heard the news], I didn't know whether to be happy or sad. Varela had his good side, but my freedom doesn't have a price," she said. "I felt the golden cage had been flung open, and I could fly again."

All About Colombia • Drug Trafficking