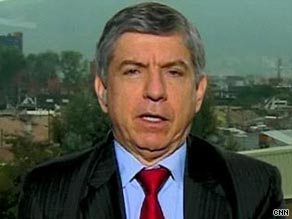 "Just putting all consumers in jail, as the U.S. does, is not a solution," he told CNN's Christiane Amanpour. "You have to reduce consumption."

In a wide ranging interview, Gaviria said the United States now has more people in jail for narco-trafficking or related crimes than there are prisoners in the whole of Europe.

"What you need to do with addicts and people who consume drugs is deal with them as a health problem, an education problem," he said.

Gaviria and two other former Latin American presidents -- Fernando Cardoso of Brazil and Ernesto Zedillo of Mexico -- are all arguing the war on drugs has failed and it is time to replace current policy with what they call a more humane and efficient approach.

Colombia remains the principal source of cocaine for the world, despite $6 billion in U.S. aid for anti-drug campaigns over the past decade.

Watch the interview with Gaviria »

Gaviria said it's time the United States changed its approach. "The U.S. has to look at its policy, to start to use more of that $4 billion a year that they use, to use more of the resources in the health system, in treatment and taking some people out of jail."

He highlighted the problems Mexico is facing handling its drug problem.

Thousands of people have been killed there in drug-related violence in recent years.

He said democracy in Mexico is paying a significant price, with major damage to its judicial system, its police, and its army.

"The Mexicans probably in a few years will be able to deal a little better with the problems of security," he said. "But the flow of drugs will keep growing."

He declared, "We will never be successful unless the U.S. reduces consumption and Europeans do, also."

All About Colombia • Cesar Gaviria