End to Honduras crisis? Not so fast, negotiator says

TEGUCIGALPA, Honduras (CNN) -- A negotiator for de facto Honduran President Roberto Micheletti said that no deal was reached between the two opposed sides Wednesday, as other government officials had reported. 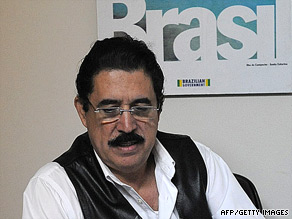 Ousted President Jose Manuel Zelaya has been staying in the Brazilian Embassy in Tegucigalpa, Honduras.

Ninety percent of an agreement to end the country's ongoing political crisis has been reached, Micheletti negotiator Vilma Morales said at a news conference Wednesday, but some key points remained to be worked out.

Earlier Wednesday, a government official told CNN en Español that negotiators for both sides had reached a consensus that could bring resolution to the political crisis. Micheletti and ousted President Jose Manuel Zelaya would have to agree to any proposed resolution.

Earlier Wednesday, Honduran Undersecretary for Security Mario Eduardo Perdomo told CNN en Español that negotiators for both sides had reached a consensus that could bring resolution to the political crisis. Micheletti and ousted President Jose Manuel Zelaya would have to agree to any proposed resolution.

His statement followed remarks by Zelaya negotiator Victor Meza, who said an agreement had been reached on the point of Zelaya's demand to be restored to the presidency, according to local reports.

Morales rejected that the talks had found consensus on Zelaya's fate.

"At this moment, there is nothing definitive regarding that point," Morales said.

Meanwhile, a close advisor to Zelaya insisted that a draft agreement was approved by both sides and was being presented to the respective leaders.

The reason behind the two sides' contradictory claims was not immediately clear.

The most recent talks between representatives of Zelaya and Micheletti began this week following a visit from a delegation from the Organization of American States.

The OAS visit marked the first time the two sides sat down for direct discussions since August, and the first since Zelaya sneaked back into Honduras last month.

Zelaya covertly returned to his homeland and found refuge inside the Brazilian embassy in the Honduran capital, creating a new standoff. Zelaya has demanded to be reinstated as president -- Micheletti has accused Zelaya of violating the constitution and said he will be arrested if he leaves the embassy grounds.

Honduras has been in turmoil since Zelaya was forced out of the country in a military-backed coup on June 28 and replaced hours later by legislative leader Micheletti.

The United Nations, the OAS and the European Union have condemned the coup and demanded that Zelaya be reinstated.

Previous attempts at negotiations have failed.

The current talks are based on a proposal known as the San Jose Accord, proposed in July by Costa Rican President Oscar Arias.

Other obstacles to a resolution included an emergency decree imposed by Micheletti in September, after Zelaya's surprise return, that limited some freedoms in Honduras. One radio station and one television station with a pro-Zelaya stance were shut down under the decree and remain closed despite the decree being revoked earlier this month.

Presidential elections are slated for November, creating additional pressure for a resolution to be found. Micheletti has said that a president-elect could take over the negotiations after the election, but many countries have indicated that failure to resolve the crisis could discredit the election.