(CNN) -- A Siberian Tiger mauled a man Monday morning after he and a friend scaled the fence of the Calgary Zoo and pressed up against the tiger cage, zoo officials said. 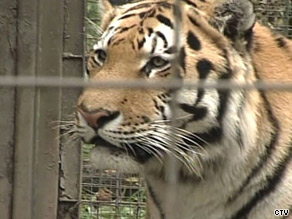 Two-year-old Vitali is normally one of the more laid back tigers, zoo officials said Monday.

"The information we have is that while his injuries appear not to be life-threatening. They are, however, quite serious," Graham Netwon, the zoo's director and chief financial officer, said at a news conference Monday.

The two 27-year-old men, who were not identified, then headed toward the tiger cage, where they scaled a safety fence meant to keep the public away.

The two men never entered the cage, but stood in between the safety fence and another fence meant to "keep the tigers in" when they startled a 2-year-old Siberan tiger named Vitali.

Watch Vitali inside the zoo enclosure »

Once the tiger was startled, he probably clawed one of the men, officials said.

"My guess would be that the gentleman was hooked by a claw and the arm dragged in and then continued to be attacked from that point," Black said during the news conference.

The second man then struggled to help his friend escape the tiger's grasp, officials said.

The tiger was likely trying to protect itself, officials added.

"He's perfectly fine. A tiger is a carnivore, so they're going to behave naturally, and that's his natural reaction," zoo curator Tim Sinclair-Smith said.

"Vitali has certainly done nothing wrong here. It's his natural behavior," Sinclair-Smith said.

Vitali will remain in the exhibit.

The tiger had not previously attacked any people, Black said.

"In the normal course of a day, Vitali is one our most laid-back cats, I would say," Black added.

Calgary Police Department Acting Staff Sgt. Rick Halford said authorities were investigating the case and will decide whether to pursue charges against either man.

Zoo officials and police said they had no idea what the motive was for breaking into the zoo, or nearing the tiger cage.

"There's no indication that the two offenders were involved in anything other than just being silly, I suppose," Halford said.